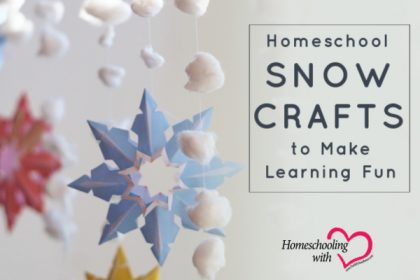 Bring the snow indoors by engaging your kids in these homeschool snow crafts this winter!

Whether there is snow piled high outside your door or you have yet to see a flurry this season, your kids will love these hands-on activities that will keep them busy for hours. Though adults may easily tire of the work associated with days of heavy snow such as shoveling and plowing, children seem to find snow fascinating and rightly so. These incredible masterpieces, created by crystals forming on tiny pieces of dirt floating in the air, are each so unique. The geometrical shapes vary from snowflake to snowflake though it is common for them to have five points. If the supersaturation is high enough, the shape of the snowflake could instead have six identical arms. Contrary to popular belief, snow is not actually white. It is clear! The white comes from the reflection of the sun.

Kids are also drawn to these captivating crystals because of all the fun they can have when there is more than a simple dusting in their backyards! Sledding, snowmobiling, skiing, snowboarding, snowball fights, and the infamous creation of snowmen (complete with a carrot nose) have entertained children over the years. Feed your child’s wonder of this aspect of God’s creation by expounding on it. Bring in the science. Teach them about how important snow is to the water cycle. Remind them that snowfall is a form of precipitation while highlighting the fact that it melts into water and becomes a part of the water cycle that they have already learned about. Do a unit study on a particular animal whose habitat is in the snow such as the arctic fox. God has given the arctic fox incredible insulation, allowing it to survive extremely cold temperatures, and children would have a blast studying this creature.

You could also focus on weather patterns created by snow such as blizzards and avalanches. Teach your child the definitions of typical snow terms that he/she might hear on the news—snow flurries, snow showers, etc.  Dig deep into the history of snowstorms in your town or region. Did you survive a blizzard of 1995 and have the stories to prove it? Did one of your parents live through a historic blizzard that they could share with your children where they had to dig themselves out of their front door while living by candlelight until the electricity kicked back on? Do some research and find out how snow has left an impact on your town’s historical records and have your child do a report on it!

Finally, get crafty! Pull out the cotton balls, construction paper, and scissors and let the creative juices flow! What better way to drive home a good lesson than with a hands-on craft or activity? Give your child the chance to take what he/she has learned and showcase it through a craft! Looking for snow-themed craft ideas to add to your homeschool lessons or unit studies? Give some of these a try!

Snowflakes that Cling to Glass and Snowflake Card from Susan Evans

Build Your Own Snowman Kit from The Peaceful Mom

Frosty the Snowman Activity Trio from Our Crazy Adventures in Autismland 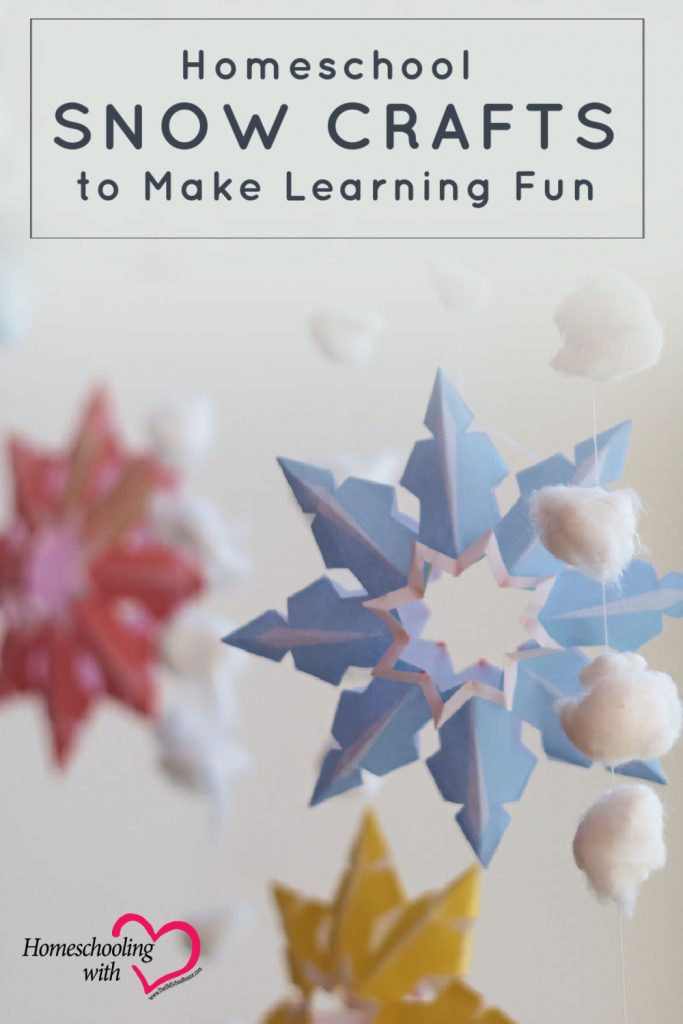