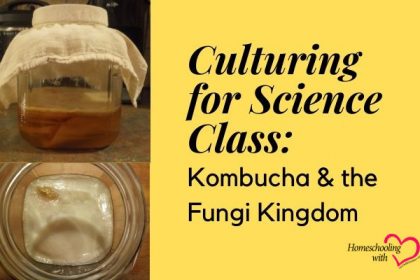 In science, my children have been studying taxonomy recently. We read about the Animal, Plant, and Protista Kingdoms.  As we reached the Fungi Kingdom, we learned that fungi do not ingest their food like animals do or make their own food, like plants, but absorb nutrients from their environment through their bodies.  They do this by growing through and within the substance on which they are feeding then secreting digestive enzymes which break it down, making it easier for the fungus to absorb the nourishment that the substance contains.

Most fungi are decomposers who feed on dead or decaying material. They help to turn leaves, dead trees, and other debris that would otherwise accumulate on the ground, blocking sunlight and preventing growth of new plants, into nutrients for the fungus and for other organisms which may eat fungi.

Yeast is another type of fungus.  When you think of yeast, the little packets that you use to make bread are probably the first thing that come to mind.  However, as we were studying this kingdom, I realized that I have another example of a yeast fungus right inside one of my kitchen cabinets – a kombucha SCOBY.

A SCOBY is a symbiotic culture of bacteria and yeast.  SCOBYs are a combination of acidophilic yeast and acetic acid bacteria.  Acetic acid is the main component of vinegar, apart from water.  When placed in a jar of sweet tea, it ferments the tea, and after a week, transforms it into a slightly acidic, probiotic-rich beverage known as kombucha.  During the fermentation process, the SCOBY breaks down the black tea and sugar to provide acetic, lactic, gluconic and glucuronic acids, ethanol, and glycerol.  It also produces B vitamins.  The yeast cells break down the sucrose (sugar) into fructose and glucose and then metabolizes them.  In other words, the SCOBY eats the sugar.  You will sometimes hear them referred to as kombucha mushrooms, but although the yeast part of the SCOBY is part of the fungi kingdom, it is not a mushroom.

If you’d like to demonstrate this process to your children, the easiest way to do it is to find a kombucha-making friend to share a SCOBY and a cup of starter liquid with you.  A new one grows every time a batch of kombucha is fermented so they should have a spare one.  If you don’t have a friend who makes kombucha, you can order one online or make one of your own.

Once you have obtained or grown a SCOBY, you are ready to make some kombucha and demonstrate the process of a fungi absorbing nutrients through its body.  The recipe that I follow is this:

The time that you let it ferment will affect the taste as the longer it sits with the SCOBY in it, the more sugar that the yeast will metabolize.  Therefore, a week is a good amount of time if you want your kombucha to have a slightly sweet flavor.  If you leave it for a month, the bacteria part of the SCOBY will begin to take over, eating some of the yeast, which results in an increased production of acetic acid, leading to a more vinegar-like flavor in your end product.

Covering your kombucha with a tea towel instead of a lid is an important step because the bacteria will release carbon dioxide as it eats, and the CO2 needs to be able to escape the jar.  I explained to my children that the SCOBY has to breathe.

I hope you enjoy experimenting with kombucha and learning some things about the Fungi Kingdom in the process.

Heather Eberlin is a married mother of four children, ranging in age from eight to twenty-seven. She is currently homeschooling her two youngest children and has felt called to share her journey in order to encourage others. She is an amateur gardener who is amazed at the things that God’s creation reveals when you take the time to pay attention to it. You can follow her at Musings from My Garden or download her free Homeschool Organizational Forms here. 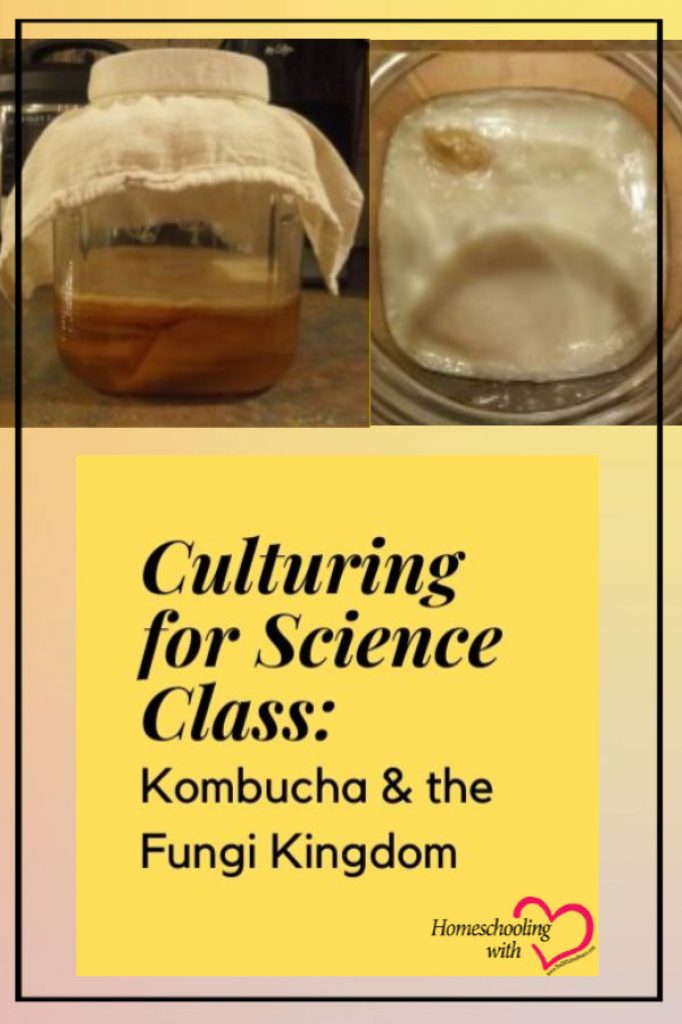