5 Musical Games to Play in the Car 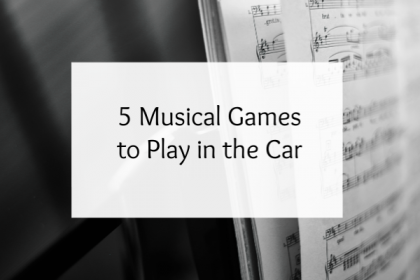 Do you have any summer road trips coming up? Playing games is a fun way to help pass the time. My family loves playing games in the car, but we get bored quickly with standard classics like “I Spy.” I love playing a variety of games that kids of all ages can participate in.

Since we enjoy music, I thought having some musical car games would be fun. Here are five that my family really liked.

As a bonus, none of these games require any material. You don’t have to pack anything extra or worry about forgetting an important game piece in order to play. You just need yourselves, your mind, and of course, your voice.

The goal of this game is to sing a song that starts with each letter of the alphabet. This game is a bit of a challenge, so younger kids may not enjoy it as much as the older ones.

To help keep them involved, I always just let my little guys say the name of any song for us to sing. Then the next player takes the letter that child was supposed to be on.

When you play, you might start with A Whole New World from Aladdin and sing your way down to Zacchaeus.

Of course, some letters are more challenging than others. As a family, we agreed to skip Q and X when no one could think of a song for those letters.

Here are the rules we used:

* The song’s title had to start with the given letter.

* Any genre was fair game. We sang hymns, songs from movies, theme songs, and more.

* We sang one verse from each song, unless everyone loved the song. Then we might sing it all.

Musical movies are the star of this show. My family tended to pick Disney movies, because they were familiar to everyone.

The goal is to sing all the songs from the movie you name. So, if someone picks Frozen, here’s the goal:

Whew! That’ll keep you busy for a while! When you reach the end of the movie, have another person pick a movie.

Just do the best you can with the lyrics and order of the songs. This led to some great discussions about each movie as we tried to remember the order.

3. Songs with a Word

The goal of this game is to sing as many songs as possible with a common word. One person picks a word to start, and when you can’t think of any more songs with that word, give another person a chance to pick a word.

If your first word is tree, you might sing:

And any other songs you could think of with the word tree in it. There are tons of them!

Here are the Rules we Used:

The goal of this game is to work together to sing a song, one line at a time.

I picked a song that most of my kids knew the words to. Then, I sang the first line. Another player sang the next one. We kept going until we reached the end of the song. Then, another person picked a song.

The goal of this game is to name as many television theme songs as possible, and sing them. One person would pick a theme song. Then we’d all join in together to sing it (to the best of our memory)!

Then another person would pick. Take turns naming songs until you can’t think of any more.

We decided that different versions of a song counted as different songs. This meant we sang several different Teenage Mutant Ninja Turtle songs. It made the game last longer, which is what I was going for.

Do you play musical car games? What are your favorites?

I’d love for you to share your favorite musical car games in the comments section below. We’re always game for trying a new one!

Looking for Other Car Games?

Check out these posts for even more car game ideas:

Math Games to Play in the Car

Lisa Tanner is a homeschooling mom of eight. She loves writing about balancing diapers and deadlines, and ways to make learning fun.

Share on FacebookShare on PinterestShare on LinkedInShare on TwitterShare on PocketShare on Email
Tagged under: 5 musical games to play in the car, homeschool, homeschooling, lisa tanner

2 Comments to “ 5 Musical Games to Play in the Car”