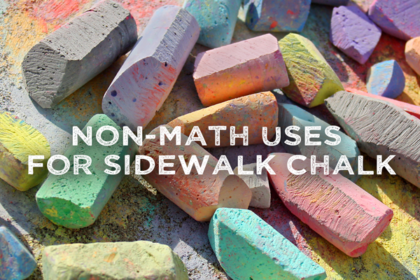 My daughter’s love of sidewalk chalk began when she was three or four years old. I introduced the medium as a way that she could practice her numbers while she was playing outside. Little did I realize the many uses she would find for sidewalk chalk! Using sidewalk chalk was her preschool. Sidewalk chalk has been a major part of her schooling. It may even have been her outlet at one point. She has used sidewalk chalk in ways I never would have imagined. What began as color, shape, and number recognition has led to letters, words, and even geography!

Although my daughter used numbers quite often in her chalk play, I am focusing on other subject areas that could be taught or reinforced through chalk.

(1) Teach colors. As she learns her colors, you may want to hand her the wrong color from time to time to see if she corrects you.

(3) Word patterns, such as CVC or CVC-Silent E*

(7) Jump to the letters in her name

(9) Homophone Jump. Write pairs or trios of homophones. Have your child jump on the word you define, describe, or use in a sentence. For example, write “hare” and “hair.” Then say, “The Tortoise and the Hare” or “brown hair.”*

(10) Write only the letters that are in your child’s spelling words. Use each letter only once. Call out the word and have your child jump on the letters in the correct order.

(11) Scramble your child’s spelling words. Follow the procedure above.

(12) Parts of Speech Jump. Play this game to review all parts of speech or to work on a specific concept, such as objective and subjective pronouns. Write several words with sidewalk chalk. Have your child jump on the words based on clues you provide.

(13) One day I looked outside to check on my daughter while she was using her chalk. Instead of the usual shapes, numbers, and words, I saw a map of our neighborhood. It was hardly to scale. However, it included places that were familiar to her. As she continued to draw maps, she even named the streets. If this is something your child would naturally lean toward, encourage him or her to draw maps, landmarks, or places you’ve visited and tell you about them.

Sidewalk chalk is a simple, inexpensive learning tool. Try these ideas and see what other ideas grow from them. If you have other uses for sidewalk chalk, please share in the comments below.

*These games were inspired by a blog post entitled “CVC Word Jump” from traininghappyhearts.blogspot.com/2011/10/cvc-chalk-word-jump-game-classic.html

Karen Robuck is a homeschooling mother of two, an eighth grader and a fifth grader. She holds degrees from Blue Mountain College, a Christian liberal arts college in northeast Mississippi, and from the University of Southern Mississippi. She considers her homeschooling style to be literature-based eclectic with a dash of Charlotte Mason. Formerly a teacher and librarian, she is currently working in media support for a local community college. She lives in Pontotoc, MS with her husband, two children, and a fourteen-year-old cat named Ivan.