The True Cautionary Tale of Bark and Leap 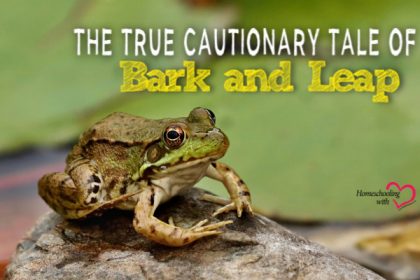 One winter day, a homeschool family called. They’d tired of examining a frog and mudpuppy another family found in their bag of ice fishing minnows. If we didn’t take the specimens next, they’d be experimental bait.

When I saw the unfortunate pair held up in their transparent bag of clear water, utterly vulnerable as if floating in midair, my mothering and homeschooling instincts kicked in. I can’t bear to let anything suffer. Besides, how could I responsibly turn down a good science lesson? We’d only have to keep the captives until spring, when they could join their indigenous brethren. Though it was not an assignment I would’ve chosen, it didn’t seem that tough.

Our girls learned a lot about frogs and mudpuppies. We also learned a lot. Common mudpuppies need cool, oxygenated water and small, live prey, which we had to buy from the same store which probably sold our duo. Mudpuppies like to climb out of the water occasionally. They’re good at escaping. And did I mention they bark? So “Bark,” became our mudpuppy’s name and our old bedroom, the coolest room in the house, became his. Lately I’d preferred the warmer den anyway.

“Leap,” our leopard frog, lived in what had been our living room. According to Animalspot.net, “The voice of these frogs sounds like a small motor boat engine. They mainly call during night and occasionally during daytime. They give a loud scream when frightened or captured.” Leap’s only available local food was crickets, which we also had to purchase in our ongoing pro-life dilemma. The older girls enjoyed watching him sneak up and gobble his victims while the youngest child and I holed up, ironically, in the den.

Spring couldn’t come fast enough, especially once Bark quit eating. I rejoiced for his prey’s sake, but he concerned me. Finally, we decided he stood a better chance in the recently thawed lake than with us. A cold wind blew from the north as we watched Bark scuttle to freedom. While moving back into our former bedroom, I discovered that Bark’s moist environment had been the ideal habitat for mold. I moved back out as my husband fired up the skill saw, ripping and then replacing part of our floor.

Leap still occupied our living room, but at last the outside temperatures warmed. We headed for the lake, expecting Leap to swim for freedom like his housemate. Instead, he looked rather reproachful; “glaring,” one daughter insisted. He was still sitting by his carrying box when we drove away.

Hours later, I could take no more. “Anyone want to check on Leap?” I asked.

The girls raced for the van. Leap hadn’t budged, but as soon as he got into our van, he apparently decided freedom wasn’t so bad. He tried to escape, and his box almost came apart in shrieking said daughter’s lap. We actually caught this on video.

Eventually we found a good home for Leap in a nearby ditch where the water was warmer and other leopard frogs sang—not too many, our girls made sure: just enough so he wouldn’t be alone or bullied. He seemed happy. We checked on him daily, until he ventured far from his box and presumably took his place in the choir.

You know the saying about how if you save someone’s life you’re responsible for them forever? Well, while not exactly involving “someone” or “forever,” the Bark and Leap incident helped me learn about capping the number of creatures under our roof (and especially in our bedroom): One stray dog and two stray cats are enough. But that’s another tale.

Constance Clay is a former journalist, Evangelical Christian Publishers Association best-selling novelist and adjunct professor of composition at a state university where she earned her MA in literature. Currently she’s a grateful child of God. He’s shaped her into a homesteading wife of thirty years and homeschooling mom of twenty years with one Christian university graduate, another undergraduate at the same school and the youngest a homeschooled fifth grader (approximately). Constance began a blog at isaiah64eight.org and she’d love to hear from you!

Share on FacebookShare on PinterestShare on LinkedInShare on TwitterShare on PocketShare on Email
Tagged under: constance clay, homeschool, homeschooling, the true cautionary tale of bark and leap