CONNECT WITH THE CANADIAN SCHOOLHOUSE: 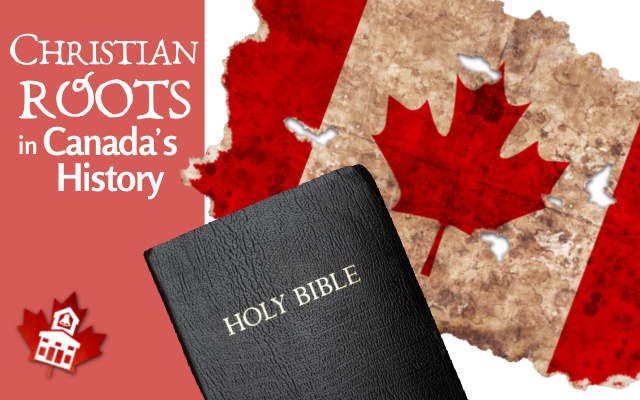 At my 45 years of age, I remember when every day at public (government-run) school the Lord’s Prayer and O Canada is what started us off. I’m not sure when that stopped, but I believe public education went downhill quickly when it did. While I thought that in this day and age all indications of God or a slight mention of His hand in Canada’s government history were long gone, I was amazed to find that some of our parliament buildings still hold a remarkable honour to God.

My first contact as I stumbled upon the biblical legacy of our government was a post from ChristianRoots Canada about their booklet, The Legacy of 25 Scripture Verses on Parliament Hill. At a time when I felt government overreach had magnified and I was drawn to verses about overcoming Babylon and the promise of God’s judgment and justice in the earth, I found secure and solid evidence that God was confirming Canada as His in generations past. And I felt assured that it’s still His today.

If I remember correctly, it was a quote from Pericles that I heard and searched out to discover its origin and found that it is part of the stained glass panels of the Peace Tower on Parliament Hill.

“Freedom is the sure possession of these alone who have the courage to defend it.”

Freedom can be interpreted as many different things. We can read about freedom in the Bible in many different ways. The freedom to homeschool, freedom in Christ, freedom of religion, human rights and fundamental freedoms — these all encompass the various ways we see freedom.

History teaches us about times when freedom of a nation has been lost, personal freedoms have been encroached on by governments, and when God has worked through individuals to take the action needed to remind us of God’s freedom and desire to reign in this country for generations.

Seeing God’s Word all over the Peace Tower and Memorial Chamber gave me a hope in our government I never had before. It’s not that I believe we have many God-fearing “leaders” working for us in the government; it’s because God’s work will be done even through unbelievers. 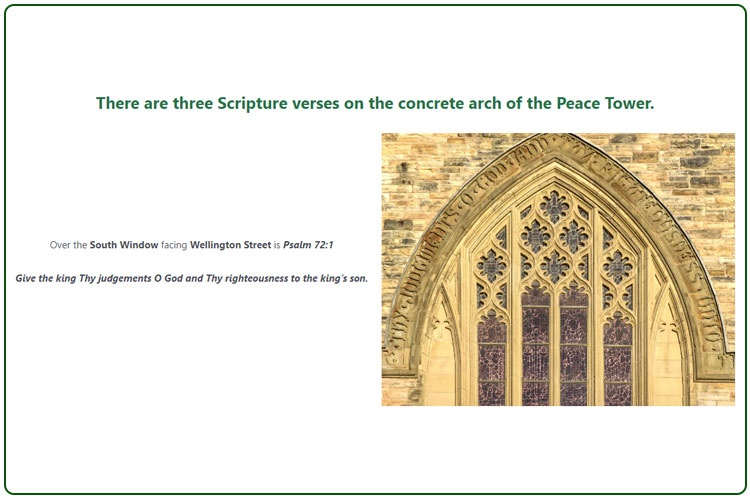 How many books of the Bible include a story where God worked through kings, prophets, and donkeys that didn’t even honour Him? That’s kinda the story of the construction of the Scriptural elements in our parliament buildings. The carvings and Scripture references were not commissioned by the politicians of the time (1921) but are the work of the chief architect, John A. Pearson. This quote below is from The Biblical Legacy of Canada’s Parliament Buildings, and comes right after a parliament transcript from two different days of discussion regarding the words to be inscribed on the tower:

“As you can see, the inscriptions on the Peace Tower did not originate from the will of our politicians. On the contrary, they were prepared to see them removed. But God used the vision of an architect and the inertia of civil government in His Providence to ensure that these Bible passages would be inscribed in such a visible public place, at our seat of national government. What we do have is the finger of God—the Word of God—carved into the architecture of the buildings which symbolize our national government, notwithstanding the political fancy of the day, and regardless of the particular convictions of the governments and political leaders who come and go.”

Amen and Hallelujah to that!! 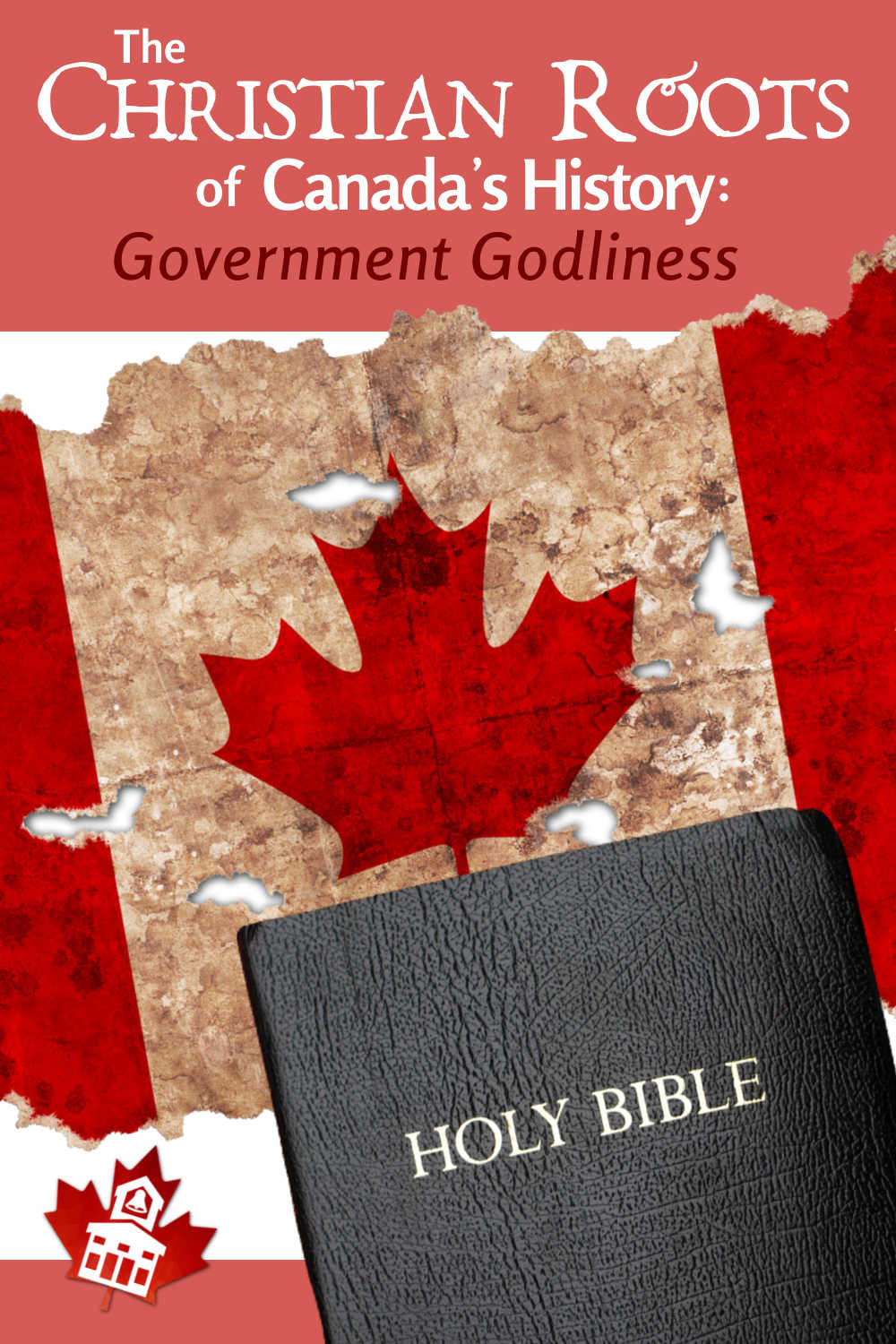 The Christian People of Canada’s History

God is always working through people, and while He may work through unbelievers, I’m pretty sure that the majority of people who do God's work are the ones that love and follow our Lord and Saviour. As noted above, John A. Pearson was a man of God who seemed to be wonderfully blessed with superior skill in architecture. For such a time as then, Pearson was to be the one with the architectural vision for the rebuilding of the Centre Block of the Parliament Buildings. As described in the article John A Pearson -The Man, His Character & His Legacy:

“In 1916, Pearson was 49 years old when the Centre Block was destroyed by fire. Together with Omer Marchand from Montreal, Pearson won the contract to rebuild the Centre Block and Peace Tower of the Parliament Buildings. His many decades of experience prepared him for the job of rebuilding the Centre Block. Pearson had built quite a number of huge and imposing structures from one end of the country to the other.  By 1913 when he was 46 years old, the Year Book of Canadian Architecture had already designated him as a “Master Builder.”

His design utilized the footprint of Centre block that was already there from the old wooden building, but he improved on it to make it fireproof, more modern but yet blending in with the neo-gothic design of the East and West Block of Parliament Hill.”

What do you think? Does it sound like God prepared John to secure His Word in our nation’s capital?

Another strong and faithful Christian in Canada’s history is Sir Adams George Archibald. Politics was in his blood though he spent part of his adult life working as a lawyer until he left his legal career for full-time politics at the age of 37.

“Although Archibald supported province-wide, taxpayer-funded education, he opposed the hands-on supervisory role of the Cabinet, stating that “the government (and politics) should stay out of education, as the way to nurture social harmony”’.

Education seems to be one of those institutions in Canada, which was begun in many provinces by Christians with godly intentions, but without a biblical, generational vision to sustain it. 150 years later, many are making the case, with compelling evidence, that even taxpayer funding of education is a political intervention too far, intervention which does not nurture social harmony.”

It seems like Archibald’s vision of public education was for an improved society, but only if the government stayed out of it. Those seem like pretty wise words. Go to the article link above and read the whole article describing more about his Christian principles and political achievements, including the founding of Manitoba.

There are many more Christians in our Canadian government history that have been given the skill and the desire to be one on the inside for God. Go and seek His Kingdom and His righteousness. Learn more about God’s presence in our country’s birth and development and be confident that we are a land under His dominion. He has equipped every one of us to do his work so take on that individual freedom you have to stand on His Word.

Stephanie, her husband, and two boys are perfectly placed in the prairies of Saskatchewan, Canada. She has educated her two youngest boys, ages 14 and 11 since birth. Pursuing her calling to help parents enjoy the responsibility of educating their children, she works for The Old Schoolhouse® in the Canadian division and in sales support helping to connect parents to the materials and programs that help them teach. She loves being a homebody, growing food indoors and out, and building up her permaculture property. See more of her articles on homeschooling, homesteading & home business at https://homeschoolblogger.com/homebizhealth.