The Coastal Province of Nova Scotia 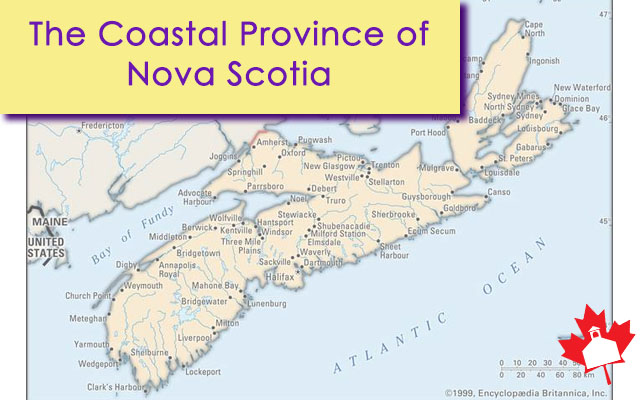 Nova Scotia is one of the three maritime provinces in Canada. It is a beautiful and picturesque province that is well-known for its high tides, yummy lobster, blueberries, fish and apples. It also has a well-known history of over 350 shipwrecks on Sable Island (which is a 44 km long sandbar) that lies about 300 km off the coast of Halifax. These shipwrecks mainly occurred before 1947 when navigation systems weren’t as advanced. There was also the tragic explosion when two ships collided in the Halifax harbour (one of them filled with explosives) in 1917.

Fortunately, this province has a reputation of beauty and charm as well. The stunning scenery among the hills, several mountain ranges, river valleys, lakes and forests, windswept barrens, and a varied seacoast that ranges from extremely rugged to broad sandy beaches makes the view at these places breathtaking. Nova Scotia is surrounded by lots of water which includes bays, saltwater marshes, coves, inlets and beaches. The entire province is located within the Appalachian Mountains which is a land form that is shared with the United States.

The Cuisine and Culture

As with most locations, there are certain foods Nova Scotia is known for and maybe the most famous is the delicious Digby scallops, named after Digby, Nova Scotia, where they were first fished and commercialized. Other foods that are popular cuisine in Nova Scotia are:

What makes Nova Scotia a great tourist attraction? Besides the unique foods, it is surrounded by beautiful beaches that you just can’t resist. Other tourist activities include:

Discover more about these travel destinations and many more that make Nova Scotia a great place to visit and explore.

Here are some fun facts about Nova Scotia that you may not have known.

The British gained control of the region somewhere between 1710 and 1758. Halifax was established as a new capital in 1749. Nova Scotia was one of the founding four provinces to join Confederation with Canada in 1867. The name Nova Scotia is Latin for New Scotland. The Nova Scotia flag was created in 1858 and is a banner of a coat of arms. This coat of arms was granted to the British colony by King Charles I in 1625. The province name and its flag all relate to its Scottish heritage.

It is roughly 360 miles long but less than 80 miles wide at any point. The province constitutes the peninsula of Nova Scotia, Cape Breton Island, and several small attached islands. The mayflower is the province's flower, and it blooms in early spring and the province’s bird is the Osprey, which lays 2-3 eggs per year. It is a meat-eating bird that lives mainly on fish.

Get some worksheets and teaching help to learn more about Nova Scotia with your children at DLTK’s KidZone.

Check out this scenic tour of the province that includes amazing scenes and travel ideas: