Winter Traditions and Festivals Across Canada 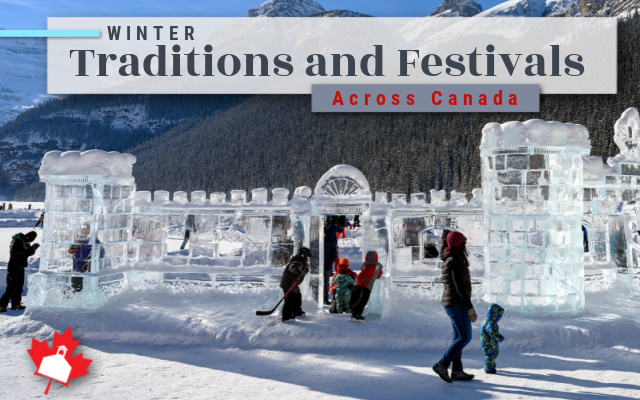 One thing is for certain, Canadians know about winter! Though the weather varies in different parts of the country, all parts experience at least a little bit of winter.  Year after year, Canadians participate in their favourite winter activities and look forward to their winter traditions. Canadians everywhere look forward to winter activities such as skating, snowmobiling, sledding, skiing, and making snow angels, but that’s not all there is to do in our beautiful country. Make yourself a maple syrup lollipop (hot syrup poured into snow and rolled with a popsicle) and learn about some festivals that have become winter traditions across Canada. 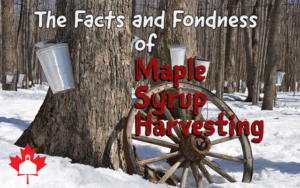 Learn more about maple syrup harvesting and making a maple syrup lollipop. Also known as taffy on the snow or maple taffy.

You can also watch a video of a walk through a sugar bush and the making of maple taffy!

Go to the article

Every February, 120 teams from around the world gather in this small New Brunswick town for a 4 day pond hockey tournament on Roulston Lake. There are 20 different outdoor rinks hosting the games. This event began as, and continues to be, a fundraiser for the building of a local recreation centre; however, it has grown into much more than that. This is an event that hockey enthusiasts from around Canada and the world look forward to each year with about 8,000 spectators coming to watch and cheer.

Purvirnituq is located on the 60th parallel and is home to the largest Inuit community on the eastern coast of the Hudson Bay and is also home to a winter cultural festival every second March. Snow sculptures in the shape of caribou as well as the herds of caribou parading through the community draw people to come and check it out. But the sculptures aren’t the only appeal of this winter festival. Participants can also try their hand at igloo-building competitions, relay races, dog sled races, a carving competition, and a challenge to see who can build the tallest Inukshuk. This festival highlights different Inuit skills and is fun for all.

Held in February in Hawrelak Park on Northern Saskatchewan River, this 10 day festival began as a small skating event rooted in Dutch traditions and has blossomed into a well attended celebration of winter activities. The festival includes sports, sculptures, and Cree history and traditions, such as cooking bannock. Festival goers can enjoy skating on the largest skating pond in the city or cheering on participants in the winter triathlon. Viewing ice and fire sculptures can cap off this festival of winter fun. 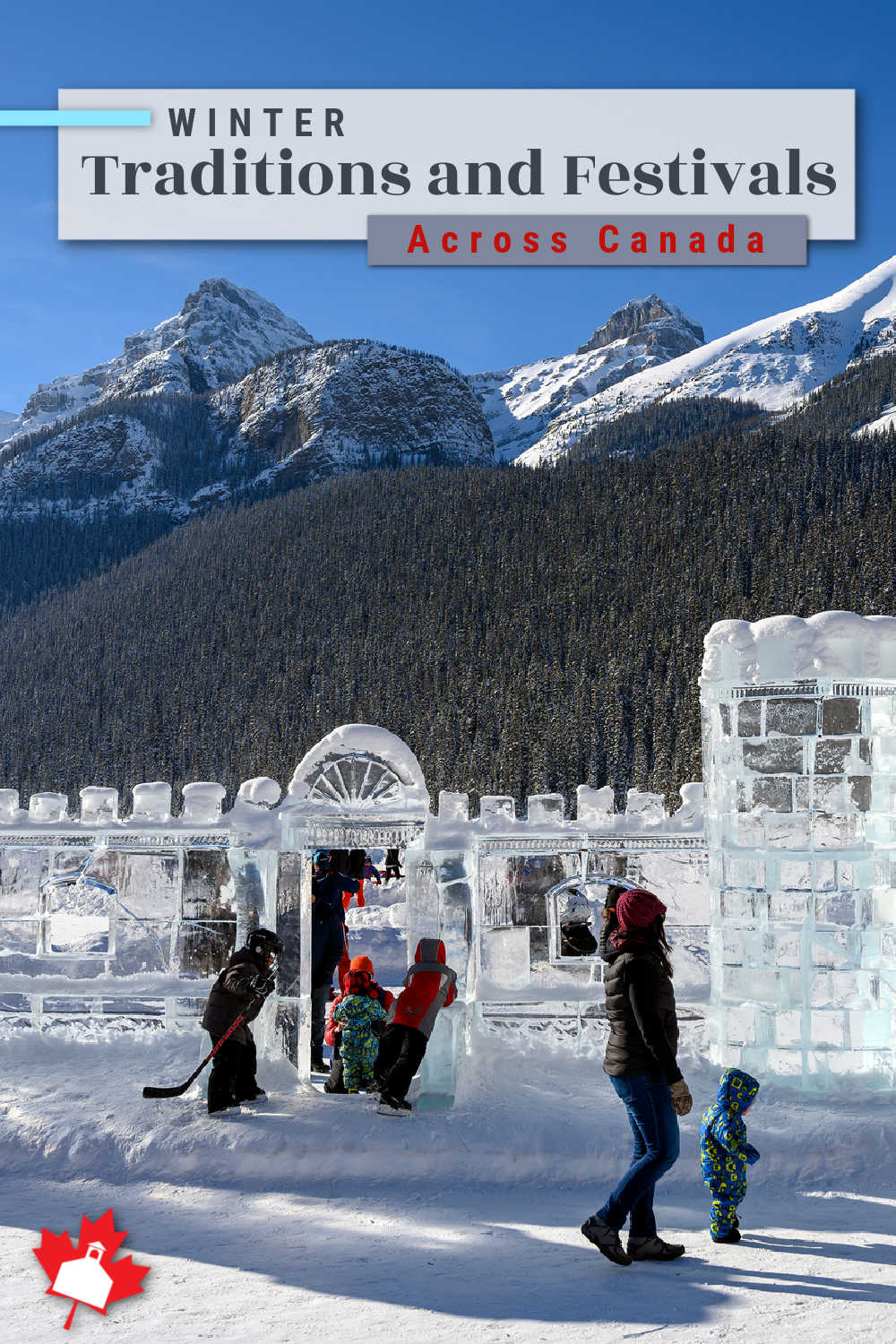 Dating back to 1897, this is Canada’s longest running winter festival.The Rossland Winter Carnival has its roots in a Norwegian miner named Olaus Jeldness who invited his friends to the top of nearby Red Mountain for a tea party. Afterwards, he sent his guests down the hill with long wooden planks strapped to their feet which he called “skis”—this is how the sport got its start in Canada. The festival now celebrates Jeldness’s legacy and his love of the sport by hosting pancake breakfasts, live music, and, of course, highly competitive ski races. “The Game” rail jam competition takes place at Red Mountain. The events of this festival are community and family centred with something for everyone!

Originating in 1945, this festival happens in late February, near the end of winter, and provides participants a way to get outdoors again and release some energy. In Yukon, the temperatures are frequently as cold as -40, if not colder. The festival includes many events to watch or participate in if you dare! This festival is inspired by the goldrush and some highlight events include the flour packing competition, axe tossing, the chainsaw chuck (sounds too dangerous to me), and log splitting. Luckily, someone had the wisdom to include separate activities for the Kids Fest.

You may wonder why this festival has sourdough in its name if there is no bread making competition! Well, a sourdough is the name given to someone who had braved a complete Yukon winter (which is considered to be from the freeze until the thaw). Fun fact (well maybe not so fun), in 2021 The Yukon Sourdough Rendezvous Society decided to rebrand the festival to drop the sourdough from the festival name yet still keeping it in their society name. This brought an uproar of epic proportions in Yukon as people flooded social media, and even uttered threats of vandalism, to express their disapproval of the festival name change. Local Yukoners view the term sourdough and this festival as an important part of their history and winter tradition.

The Snowking and his helpers spend 2 months in the freezing temperatures in Yellowknife building a huge castle made fully of ice and snow in preparation for this festival taking place through the month of March. Beginning March 1st, the Snowcastle becomes a celebration of community spirit and brings back the winter wonderment that we enjoyed in childhood. The festival promotes getting outside and enjoying the winter weather as well as encouraging family togetherness. The Castle itself hosts a large variety of events over the course of the month, something for people of all ages to enjoy. It often contains a cafe, a courtyard, a large slide, and more!

Check out this virtual tour of the many snow structures at last years' Snowking's Castle Festival or see a bigger view of the Snowcastle through this link.

While much of Canada is enjoying spring, Nunavut is just celebrating the return of more sunlight and the end of winter. At the end of April/early May, Iqaluit hosts the Toonik Tyme Festival to celebrate Inuit traditions and welcome spring, even though the temperatures are still well below zero. After a winter of darkness, people gather for a week to play games, enjoy music, and take part in delicious traditional foods. The games played throughout this festival are purposefully chosen to showcase the Inuit people’s traditions and skills. Some examples of events include seal hunting, igloo building, dog team races, fishing, and other traditional Inuit games. For those people looking for some extra thrills, you could participate in the snowmobile uphill climb and drag races! There is also a craft fair and other events highlighting the beautiful culture of Canada’s Arctic.

While these festivals are unique to their province (read about even stranger provincial traditions here), there are other winter traditions enjoyed by Canadians from west to east coast. For example, the Polar Bear Swim is a popular tradition on New Year's Day. Canadians take to the water for a frigid plunge into the ocean.

British Columbia may boast some of Canada’s mildest winter temperatures, but back in 1920, they sorted out a way to show their Canuck chops: take a swim in the Pacific Ocean on New Year’s Day (because what could be more Canadian than that?). Polar Bear dips take place across the country, but Vancouver’s is indisputably the longest standing.

What are your favourite winter traditions? We would love to hear about them! Even better, tag us (@thecanadianschoolhouse) in your picture on Instagram or Facebook and we will reshare it!

This article has been written by homeschooling staff writers of The Canadian Schoolhouse (TCS). Enjoy more of our content from TCS contributors and staff writers by visiting our themes page that has a new theme topic added every month!