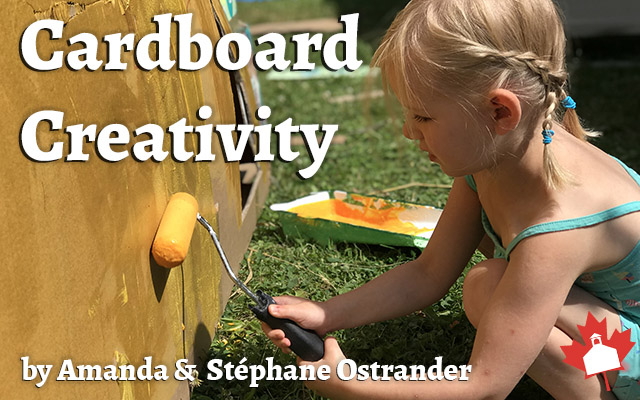 We’ve all seen it happen.

Our youngest recently turned 2. We ate cake, played games and opened presents. After the wrapping and tissue paper were strewn about, the kids played excitedly with all the new books and toys ⁠— for about two minutes. After that, they were happier playing with the boxes the toys came in.

We’ve all been there ⁠— watching children play with the packaging rather than the toy. But, most people overlook the importance of this type of play. It’s not just a right of passage, but an important tool in fostering creativity. Many people think that creativity is linked to talent. It’s the idea that someone is either creative or not, just like how some people are great at singing, while others are not. The truth is, creativity is more like a muscle. It needs to be worked and developed. With practice and regular use, one can actually improve their creativity.

In a world where creative thinking is such an asset (considered one of the 21st-century competencies), many parents are wondering how they can better encourage creativity in their children. But, how do you teach creativity? Here’s a simple lesson. Let them play with that cardboard box!

Imagination and creativity are often confused. They are connected, but they aren’t interchangeable words. Imagination is the ability to think up an idea in your head ⁠⁠— without seeing it exist in reality. Creativity is taking that spark of an idea and turning it into reality. You can imagine all you want, but creating it is another thing. You can dream of the most beautiful LEGO structure in your head, but until you sit down and start figuring out what pieces will work, how to put those different pieces together in new ways, and what adjustments you’ll need in order to make it work, you are not being creative.

In the beginning, it takes a lot of courage to be creative. Why? Because there’s a certain level of risk and vulnerability. When you’re exploring and trying things out, there’s always a chance that they won’t work out. Maybe that butterfly your child was painting, starts to drip because their brush was too wet and now they have a weird red line running through their painting. Or, maybe their tower collapsed because the base was too narrow. That space-bus didn’t turn out quite the way they wanted because their rocket boosters were too heavy to stick on with only scotch tape. Either way, there’s always a chance that their creative attempt will fail. That’s okay! The important part is that they find ways to turn that failure into another attempt at success. Maybe the butterfly becomes a flower, and that drip, a part of the stem. Maybe, they re-build their tower, but with a wider base. Or, maybe the space-bus gets its rocket boosters affixed with some stronger tape. The importance here is that we are giving our kids a safe place to practice creativity and make mistakes while they’re at it. There is no shame in trying something new ⁠— even if it doesn’t quite work out the first (or second, or third) time around.

There is nothing better than letting children explore a medium. Giving children access to supplies and materials without any directions can be a great way to encourage creativity. Whether it’s paint and paper, building blocks or a cardboard box, allowing them to create whatever they want is important. A key part of this exploration is the lack of direction and rules about how to use the medium.

Obviously, there can be some basic rules (like no painting the furniture), but letting kids create whatever their imagination comes up with is creativity in motion. It can be difficult for parents to fully let go. It’s so easy to make little suggestions. When they say they are building a car from a cardboard box, it’s easy to suggest something like adding four wheels. But now you’ve inserted your ideas. Maybe their car was going to have six wheels that flip up to become rocket boosters, and now you’ve put a limit on how things should be. Let their imagination go, and let them create what their little minds have come up with. We love encouraging our kids to play with open-ended toys ⁠— toys they can use in various ways or new combinations. Train tracks, LEGO and cardboard boxes. These are toys that allow children to be creative. Some people get the LEGO with a pre-determined design on the front. This is fine and teaches kids how to follow instructions. That’s thinking inside the box. Creativity blossoms when your kids then take it apart and rebuild something completely new ⁠— thinking outside the box. We opt for the classic bricks rather than sets. Why? Because it’s a blank canvas, and the classic bricks can be built into whatever our kids can think up.

So give your kids a cardboard box and let them have at it. You’ll never know just what they’ll create.

About Amanda and Stéphane

Amanda and Stéphane Ostrander are two teachers who decided to homeschool. They live in Greater Sudbury, Ontario where they are happily raising their two daughters, Alexie and Zoé. Avid vloggers, they love to share their homeschool journey, support, and learning ideas with other homeschooling families.