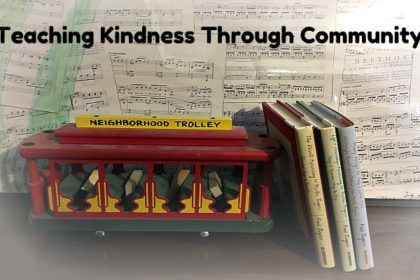 Ever since I can remember, I have been a huge fan of Fred Rogers. Yes, the “Mister Rogers” who lit up children’s television screens for 31 seasons, during the 60s, 70s, 80s and 90s. Mister Rogers greeted his television family in his work suit and tie to quickly change into a sweater and lace-up shoes, making him more approachable to young viewers. My personal favorite parts were his incredible Picture-Picture, which showed movies of factory tours and how things were made, and his magical world: The Neighborhood of Make-Believe. There were more than 100 factory tours during the course of the show, and Mister Rogers always focused on how the people made the items. This was purposely done so that children had respect for all jobs in their community. The Neighborhood of Make-Believe also focused on people, and there were many different colors and creatures (big and small) who appeared there throughout the years.

As a child, I never fit in with what other children considered normal. I was bullied at school, and my only friend was my 60-something-year-old grandpa. Mister Rogers also became my friend as he sang songs like, “It’s You I Like,” and when he ended each program by saying, “You always make each day a special day, by just you being you. There’s no person in the whole world like you; and I like you just the way you are.” He made me believe that I truly was special to him, no matter what anyone else thought.

As I grew up, I acquired books and collectibles from the Mister Rogers Neighborhood show. I have many books, and I even have a wooden trolley that looks like the one that transported viewers from Mister Rogers’ home to The Neighborhood of Make-Believe. As I collected these treasures, I uncovered how Fred Rogers was more than a television personality. He was a musician, a puppeteer, a writer, a producer, and a Presbyterian minister. However, as I pulled away yesterday’s date on my Mister Rogers daily calendar (yes, I have that, too), I realized how his focus on neighborly love was a huge influence on my life and how I raise my children.

Fred Rogers taught children a sense of community in his television show, and I really feel we are missing this in our world today. He said, “We live in a world in which we need to share responsibility. It’s easy to say ‘It’s not my child, not my community, not my world, not my problem.’ Then there are those who see the need and respond. I consider those people my heroes.” Every episode begins by asking viewers to be friends with Mister Rogers. Children are transported to a bakery, or a music store, or they spend time visiting with the mailman or other friendly neighbors; and it is this sense of community importance that I try to instill in my daughters. However, I think we could still be more cognizant of our neighbors, especially those who make it difficult to befriend. We have become such a global society now that we rarely buy books from a small bookshop, nor do we choose to purchase our bread from a bakery. Rather, we choose convenience as we gather all of our grocery and household needs at one mega store. I also have to admit, getting groceries delivered directly to my home could become a very compelling argument.

I believe as homeschoolers we have a unique opportunity to teach our children about the importance of community. Spending time in local shops and taking time to know our neighbors could ultimately create kind and courteous citizens of tomorrow. I believe that was the hope of Fred Rogers many years ago when he felt children’s programming was lacking in substance. Even though Mister Rogers Neighborhood has been replaced by other more colorful and contemporary television shows, we can use the foundations and tools taught by Fred Rogers to enhance how we parent our children. In the words of Fred himself, “There are three ways to ultimate success: The first way is to be kind. The second way is to be kind. The third way is to be kind.”

Michelle Martin was born into a musical family and has been teaching music for over 20 years. Besides teaching piano and voice, Michelle is a performer, a choir director, a writer, a composer, and a homeschool mom. Most recently she has published three music curricula through Schoolhouse Teachers. Music has always been a passion for Michelle, and she believes exposing a child to music is just as important as learning math or science. Michelle lives with her husband, Jim, two daughters, Zoe and Eva, and a myriad of furry and aquatic friends.