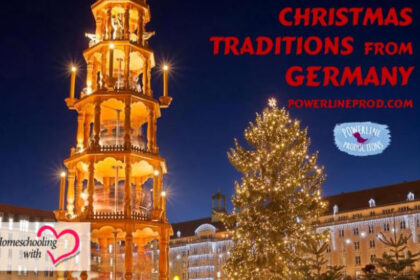 Did you know many of our cherished American Christmas traditions come from Germany?

If you like baking and eating all kinds of yummy Christmas cookies, decorating a gingerbread house, or setting up a Christmas village, you can thank the German immigrants who brought over festive and fun Christmas traditions for us to enjoy.

Here are just a few of the German Christmas traditions Americans have adopted:

Back in colonial times, German immigrants brought these festive traditions with them to a new land.

There were no German colonies in North America, but there were plenty of German settlers. German farmers, businessmen, and pastors all made their way to the New World to make a new start in a new place.

Moravians came to America to fulfill the Great Commission. They had a burden to see the Native Americans come to Christ.

Who are the Moravians?

The Moravians go all the way back in time to a pastor named John Huss, a godly Roman Catholic priest, who reminded his flock that men are saved by grace through faith in Jesus Christ. His followers in the Czech provinces of Bohemia and Moravia became known as Moravians, the oldest Protestant denomination. Huss’s writings impacted Martin Luther who nailed his 95 Theses to the Wittenberg Door in 1517 and is considered the founder of the Lutheran Church.

After much prayer and singing, the Moravians packed up their belongings and headed to the New World to evangelize the Native Americans. After an unsuccessful attempt to establish a Moravian settlement in Georgia, some of these missionaries went to Pennsylvania where they purchased 500 acres of land and built a church. They finished the building on Christmas Eve. One half was a stable, and in the other side, they held a church service. While the settlers sang in one room, cows mooed in the other. It reminded them of the stable where Jesus was born so they named the settlement “Bethlehem.”

In time, they expanded and purchased 5,000 more acres, naming their new settlement Nazareth. Other Moravian congregations were established in New Jersey, Maryland, and North Carolina. Salem, North Carolina was originally a Moravian settlement.

These “Pennsylvania Deutsch” brought with them Christmas traditions that have become embedded in our culture.

Our beloved Christmas tree comes from Germany along with decorating with lights and ornaments. Germans traditionally use candles on their trees while we use electric lights. Both tabletop trees and full-size trees come from Germany!

St. Boniface was sharing the Gospel with German pagans who worshipped idols/gods, instead of the true God, at a giant oak tree that used to stand in what is now the town of Geismar in Hesse, Germany. They were about to sacrifice a child to the idol/god Thor at the oak tree. With great boldness, Boniface picked up an axe and start chopping. A mighty wind helped his blows, and the tree tumbled down. The Germans waited for Thor to destroy Boniface with thunder, but nothing happened. So, Boniface pointed to a little fir tree, telling them that it was pointing to Heaven and the true God, urging them to give their lives to Christ.

From then on, the little fir tree reminded the Germans to look to Heaven and to the Heaven-sent baby. Unlike Americans, Germans usually set up their tree Christmas Eve, decorate it, and lock the door. The children don’t see it until they get home from church.

Christmas cookies date back to the Middle Ages, and ever since, German kitchens are busy producing all kinds of Christmas treats. Gingerbread and spice cookies are especially popular in Germany but also butter, sugar, and marzipan cookies.

You may want to search online for recipes and make some of these German favorites:

In the German fairy tale “Hansel and Gretel,” the children eat the house they find in the woods. It is made of cookies and candies. Festive gingerbread houses, birthed in Germany, are now enjoyed in America too.

Miniature houses/villages similar to the traditional timbered houses of Germany are another Christmas tradition from Germany. We set up a little village every year of Christmas houses and shops at our house.

Between December 26 and Epiphany (January 6), children dress up as the wise men and one child usually holds a stick with a star on it to represent the Star of Bethlehem to collect money for charity. If people donate, one of the singers writes the numbers of the year in chalk over their door.

How Is Christmas Celebrated Differently in Germany?

St. Nicholas Day is celebrated all over Germany on December 5 in honor of Saint Nicholas, a devout Christian who was born back in the third century or 200s. Some children leave their boots or shoes outside the door to be filled with candy, nuts, and small gifts.

Christmas markets are popular in Germany and the rest of Europe. I have never been to one in person, but I have visited them in my imagination.

Did you know that the first Christmas market opened in Nuremberg, Germany? The Nuremberger Christkindlesmarkt is the oldest and one of the largest in Germany. For over 375 years, this market in Nuremberg has been infusing visitors with Christmas cheer.

Like most German Christmas traditions, Christmas markets have spread throughout Europe and around the world. Visitors can purchase all kinds of handcrafted Christmas items as well as delicious foods.

Christmas markets open around the first of December and are a popular family outing. There is often a carousel or games for the little ones, but the whole family enjoys seeing the festive booths, hearing the cheerful music, and smelling sausages and sweet treats.

Ways to Celebrate with a German Flair