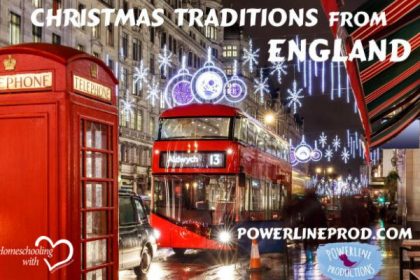 Our mother country England has given us a rich heritage of British Common Law, the Magna Charta, and the best literature in the world. In addition, many of our American Christmas traditions come from our distant relatives across the pond.

Christmas caroling, mincemeat pies, ivy, holly, and mistletoe all are adapted from English traditions. “Happy Christmas!” English folks greet one another, instead of the American “Merry Christmas.”

Let’s look at how they celebrate Christmas over in England.

The official English church is the Anglican Church, or Church of England, and they celebrate Advent with an Advent wreath and special prayers. At home, many people enjoy an Advent calendar or Advent candle. The calendar has 25 little windows while the candle has 25 marks on it. You light the candle each day and burn it down to the proper mark.

The English go all out with lights and lighted decorations inside and outside. One famous street for lights is Oxford Street in London. The lights get bigger and better every year.

An English tradition is to go to a candlelight carol service where carols are played in a romantic candlelit church. Of course, the best place to go is a cathedral. You can hear Handel’s Messiah at St. Paul’s Cathedral in London or Christmas carols at Christ Church Cathedral in Oxford. There is nothing quite like hearing pure children’s choir voices filling up a cathedral.

British folks go to midnight mass on Christmas Eve. Children hang their stockings on their bedposts, hoping they will be filled in the morning.

Queen Victoria’s husband Prince Albert brought the Christmas tree tradition over to England from Germany. English families decorate their Christmas tree together with electric lights, tinsel, and ornaments with an angel or star at the top!

The most famous Christmas tree in England is in Trafalgar Square in London right near the statue of Lord Nelson. Since 1947, Norway sends a Norwegian spruce as a thank-you for taking care of their king during World War II. While the German Nazis were occupying Norway, King Haakon took refuge in England. Families wake up early and open presents followed by breakfast. The big Christmas feast is served at mid-day, and everyone listens to the Queen’s speech at 3 p.m. Tea is served in the early evening.

The twelve days of Christmas starts with Boxing Day, the day after Christmas, and lasts until Epiphany. Twelfth Night is actually January 5, and Twelfth Day is January 6 or Epiphany. Shakespeare wrote a play called “Twelfth Night.”

Christmas cards go back to Victorian times. In 1843, Sir Henry Cole set up the Post Office and decided to create a Christmas card that people could send to their family and friends for a penny. As printing methods and transportation improved, the price of mailing Christmas cards dropped even more to half a penny. By the early 1900s, sending Christmas cards was popular all over England and had spread to the rest of Europe. Most cards had pictures of the nativity scene on them.

Did you know that carolers and caroling were banned in medieval churches and forced to carol outside? Well, let me explain.

To “carol” means to sing and dance in a circle. So, during Christmas hymns, the carolers would get up and dance in a circle while they sang. As they got more exuberant, they knocked people over and caused a ruckus. They were encouraged to “carol” in the street outside instead of in church.

Popular Christmas Carols in England include:

British children hang their stockings at the end of their bed on Christmas Eve. When they wake up, the are filled with little gifts and treats.

Christmas Dinner is served in the middle of the day, at noon or early afternoon, with roast goose or turkey or roast beef with all the trimmings: potatoes, parsnips, carrots and peas, Brussel sprouts, chesnut stuffing, Yorkshire pudding, trifle, plum pudding, trifle, and mincemeat pie. George V started the tradition of addressing the nation on Christmas Day in 1932. Nowadays, Queen Elizabeth II addresses her kingdom at 3 p.m. It is televised throughout the realm and most English families listen in.

What is a tube made of paper and covered in foil that is twisted at both ends? One more clue: when you pull it apart, it makes a loud POP!  Hidden treasures pop out, including a paper crown that you have to put on!

Christmas crackers are very popular in England and the rest of the United Kingdom. They were invented by Tom Smith in the 1840s. Short cardboard tubes wrapped in colorful paper are laid next to each plate at dinner. When the crackers are pulled apart, there is a bang! Then, a toy, gift, sweet, or party hat falls out.

Back in Colonial America, British colonists greeted Christmas morning by shooting their guns into the air. In modern times, the loud noise of guns is duplicated by Christmas crackers. Each person has a cracker at their place setting. When it’s time to pull them apart, each person crosses their arms, using their right hand to hold their cracker and pulling the person next to them’s cracker with their left hand. When the crackers POP, a paper crown made of tissue paper tumbles out and everyone puts their crowns on. The paper crown was added to the crackers in the early 20th century and is still popular today. Boxing Day is December 26, the same day as the Feast of St. Stephen, the first martyr in the early church mentioned in the book of Acts.

If you ever sing “Good King Wenceslas,” it mentions “on the Feast of Stephen.” The song is about giving alms, or offerings, to the poor. The Feast of St. Stephen was celebrated by giving to the poor and doing kind things for the needy.

In England, the offerings, or alms, were collected in boxes in the back of the church. People could put offerings in all year long. On the Feast of Stephen, these boxes were opened, and the money was distributed to the poor. This led to the term Boxing Day.

The Orangery was originally a greenhouse built for Queen Anne in 1804 to protect her citrus trees from winter weather. During the summer months, it became a place to dine or enjoy parties. In fact, Queen Anne would distribute money to the poor on the Feast of St. Stephen, or Boxing Day, in the Orangery.

This took Boxing Day from just the local churches distributing alms to individuals doing it too. During the Victorian times, Boxing Day became a day to give generous gifts and tips to servants and people in the service industry.

In wealthy homes and castles, servants worked on Christmas Day and had Boxing Day off. They also received presents from the family on Boxing Day.

So, how did English Christmas traditions make their way to America?

English Christmas traditions made their way over to America back in colonial times. Those transplanted Englishmen and Englishwomen carried their English traditions with them to the New World, from the special Christmas service at the Anglican Church to the menu for the feast. December began with the season of Advent, a time of fasting, prayer, and preparation for the twelve days of Christmas (from December 25 to Epiphany, January 6). The daily Advent prayers found in the Book of Common Prayer were prayers of repentance and heart preparation, while the twelve days of Christmas was when all the merriment took place. The Virginians loved Christmas music, both hymns and carols. They sang the hymns of the great hymn writer Isaac Watts, who penned Joy to the World, Charles Wesley’s Hark the Herald Angels Sing, and many more.

So how can you have a Merry Ole English Christmas in your house?