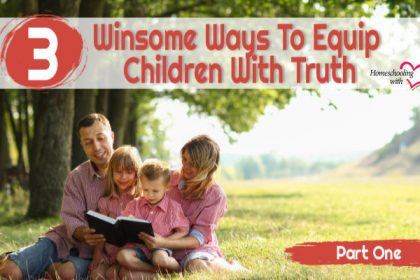 Life. A precious, priceless gift given value because we are made in the image of a loving, holy God. This God places such a high value on life that He has placed protective limits on that life, which we know from His Word, especially for innocent, helpless life like that of the unborn child.

Abortion. A horrific evil that tears, mangles, dismembers a helpless child. Murder of such brutality that we wouldn’t even kill animals in such a manner, using instruments of death like scissors and…

When teaching children about the spiritual war we are in, it is the default position to get sucked into the dark side. We see it everywhere and in everything. Beyond abortion, we have atheism, evolution, perversion of marriage, blurring between male and female, death, strife, discord. Just listing these things puts gall in my stomach – as it should us all. As believers, we can quickly set up shop and let the evil around us dictate our conversations, angry and scornful at those around us. But as followers of Christ, how can we teach our children about these things as He would? How did Jesus—God Himself—overcome evil with good? In Matthew 19, the Pharisees ask Jesus about the lawfulness of divorce. This is the divine answer could not be a more timely example in teaching our own children.

“And he answered and said unto them, Have ye not read, that he which made them at the beginning made them male and female, And said, for this cause shall a man leave father and mother, and shall cleave to his wife: and they twain shall be one flesh? Wherefore they are no more twain, but one flesh. What therefore God hath joined together, let no man put asunder.” (Matthew 19:4-6)

Based on this passage, let’s study the winsome way Jesus spoke of the truth.

The Scriptures are life and authority. By life, we see the perfection of what God created. If I am a young child who has not yet formed my view of the marital union, all I need to see is what God called “very good”—a man and a women joined as one until death—to know that anything else is a perversion of the good thing God created.

Pointing to Scripture also points to an authority that is higher than personal opinion. Jesus did not give his opinion on marriage, but rather pointed to the Creator of marriage, and thus the one Who has the right to define it. We face a world where personal opinion is seen as the only absolute. Every man does what is right in his own eyes. We have something better. We have God’s Word, the final authority on all that pertains to life and godliness.