What I Wish I Would Have Learned Before I Began Homeschooling – Part One: Boundaries With Children 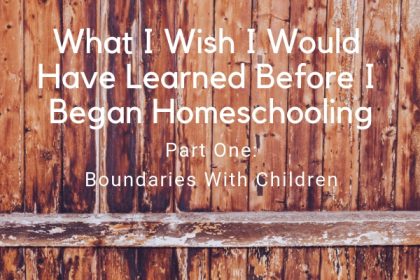 When I was preparing to begin homeschooling, I knew that I would need some kind of curriculum, school supplies, a plan and a method. However, once I was in the thick of it, I realized there was one area where I was desperately unprepared: setting boundaries.

Years ago, a Christian counselor recommended a book to me: “Boundaries: When to Say Yes, When to Say No, To Take Control of Your Life.” I purchased it, but shortly after, began dating my husband and got distracted. It sat on my bookshelf for a decade before God confronted me with the fact that I still had issues in this area that needed to be addressed. Once I began reading it, I was surprised to realize how much of my life was being affected by my lack of boundaries. Having grown up with a mother who struggled with addiction, I was often placed in the position of being the mother instead of the child. I never learned to say “no” to responsibilities that were not my own or to set limits with others.

This caused me to grow into a parent who did not know how to set the appropriate limits with my children, either. As a result, the biggest struggle that I have faced while trying to teach my children is simply having them cooperate and obey. In the summer edition of The Old Schoolhouse® Magazine, there was an article by Deborah Wuehler, entitled, “The Importance of Obedience and How to Get Your Kids on Board,” that outlined some of the steps that she used to teach her children obedience. She instilled in them, as toddlers, that she expected them to obey immediately, completely and cheerfully. That was mind-blowing to me, as my children never responded to any request that I made the first time, which is my biggest pet peeve.

If I would have realized my own weakness in this area sooner, I would have addressed it in counseling long ago and been prepared to lay the groundwork of teaching obedience to my children when they were very young. Of course, later is better than never. The challenge of doing it when my children are several years into homeschooling is that habits have been formed that need to be corrected.

If you are having trouble setting limits with your children, and find yourself repeating requests, ad nauseam, before they obey you, I highly recommend reading Deborah’s article and the book, “Boundaries” or “Boundaries with Kids,” by Drs. Henry Cloud and John Townsend. Cooperative children are so much easier to teach! Most importantly, we are not only teaching them reading and writing, but responsibility – understanding what they are responsible for and what they aren’t responsible for, knowing how to say “no” and how to accept a “no.” By setting external boundaries for them now, our children will eventually develop internal boundaries, which will be invaluable to them in adulthood and, ultimately, in parenting their own children one day.

Heather Eberlin is a married mother of four children, ranging in age from seven to twenty-six. She is currently homeschooling her two youngest children and has felt called to share her journey in order to encourage others. She in an amateur gardener who is amazed at the things that God’s creation reveals when you take the time to pay attention to it. You can follow her Musings from My Garden.