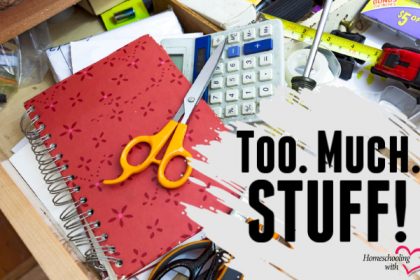 For generations, our ancestral farmhouse collected generational stuff, until little paths wound through it. My grandma dropped by shortly after my husband and I moved in. I was mortified, but all she reported to my mother was how nice the brown cloth looked on our table, the one spot I’d managed to carve from the clutter.

My fight to downsize had just begun. At first, the stuff wasn’t only ours to ditch; then we became so broke we saved any stuff we might be able to use. Later, we started acquiring our own stuff, usually at sales, often in bulk.

Homesteading required stuff, and so did homeschooling. Finally, I reached my breaking point. But now I had children to contend with—children who naturally possessed the pack rat ways of their forbears. Finances were still tight. When I did manage to pry something away from someone, somehow it usually reappeared.

Last year, everyone except our youngest got on board the declutter train, and this year she’s also aboard. We even had our own sale. We still have too much stuff, but we’ve tossed or given away boxes and boxes of what didn’t sell. Most hasn’t come back.

Sure, sometimes we miss something that’s gone. But each thing I get rid of is one thing less I have to clean or store. Ever. We enjoy the extra time, money and space from having and shopping less on a daily basis, and are better stewards of our remaining belongings. Huge amounts of stuff can cause clutter, wax old or become obsolete. We still use a wide variety of products, but we’re simplifying when possible and consuming without replacing. When we do stock up on our favorites, we try to purchase only as much as we can use before the next sale or shopping trip. We prepare a list and generally stick to it because we’ve learned a bargain isn’t always a bargain. If we don’t love or need it, we don’t buy it.

When appropriate, we keep just pictures of projects, mementos and so on, preserving memories without mass. If gifted with stuff we don’t want, we attempt to find someone who does or donate it to the secondhand store. We present our youngest with choices: Put away your favorite stuffed animals/toys/books, etc., and those your room can’t fit we’ll give to a child who might really need them. (This works beautifully when her room is messy. I come armed with a bag or two, and soon it’s clean again.)

I still hang on to stuff I shouldn’t, especially when it’s connected with people I love who are no longer here. But we’re all realizing that things aren’t people. As Luke 12:15 teaches, life doesn’t consist of possessions. And sometimes, too much stuff stops us from spending time with those we love who are here. Even God.

Now our house takes less time to clean and is cleaner overall—which also contributes to my peace of mind, because not every unexpected visitor is as gracious as Grandma.

Constance Clay is a former journalist, Evangelical Christian Publishers Association best-selling novelist and adjunct professor of composition at a state university where she earned her MA degree in literature. Currently she’s a grateful child of the King. He’s shaped her into a homesteading wife of thirty years and homeschooling mom of twenty years with two children now at a Christian university and another at home in fourth grade (approximately). Constance just began a blog at isaiah64eight.wordpress.com and she’d love to hear from you!

Share on FacebookShare on PinterestShare on LinkedInShare on TwitterShare on PocketShare on Email
Tagged under: constance clay, homeschool, homeschooling, too much stuff