The Alberta Story - More Than Oil and Cowboys 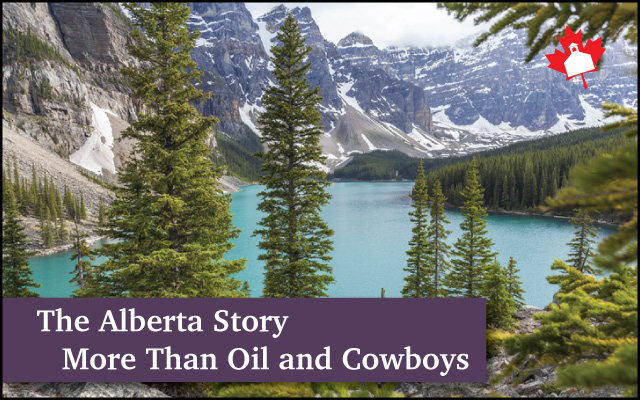 Alberta became a province of Canada on September 1, 1905, after a rather quick increase in population through immigration. The land of Alberta is diverse in its qualities and is divided into three natural regions (physiographic regions): Cordillera (Western Mountain Region) is a small section in the southwest of the province, Interior Plains is the majority of the land, and the Canadian Shield takes up a northeastern slice at the border of Saskatchewan. This diversity in the land features, along with it having the largest deposits of oil and natural gas in the country, make it a popular destination for living and visiting for Canadians and international travellers.

Alberta’s first European settlers were the British who claimed the area as part of Rupert’s Land, named after Prince Rupert, the first governor of the Hudson’s Bay Company. In 1870, just three years after Canada’s Confederation, Rupert’s Land was purchased to significantly add to the size of the country. From 1670 to 1870, it was the exclusive commercial domain of the Hudson’s Bay Company (HBC) and the primary trapping grounds of the fur trade. After the Rupert’s Land purchase, Alberta became a district of Canada’s Northwest Territories until receiving provincial status in 1905.

Major oil discoveries started in 1914 in Turner Valley, slightly south of Calgary. Then more oil sources were found in 1948 in Leduc (south of Edmonton) and in 1956 in the Pembina field (west of Calgary). The Alberta oil industry later expanded to Grande Prairie and, most recently, the Athabasca River containing the world’s richest oil deposits south of Saudi Arabia. Natural gas reserves have also been discovered near Medicine Hat and Pincher Creek.

What’s under the ground is a major industry in Alberta, but the land holds many valuable assets for farming, tourist attractions and historical significance.

Home to five UNESCO World Heritage Sites, the land of Alberta offers impressive sights and memorable experiences for families and adventure seekers. You’ll find distinctive landscapes like golden prairies, snowy mountain peaks, and wind-shaped rock formations that boast God’s beautiful work on this Earth. Read about five widely-known destinations below and go to Atlas Obscura for an in-depth look at all the popular and lesser known places in Alberta to learn more about the land and culture. Whether you want to plan for a visit or gain knowledge about the land and culture of Canada, the information and resources in this article will give you much to talk about with your kids. Here are a few other learning sites to help you and your family learn more about Alberta: