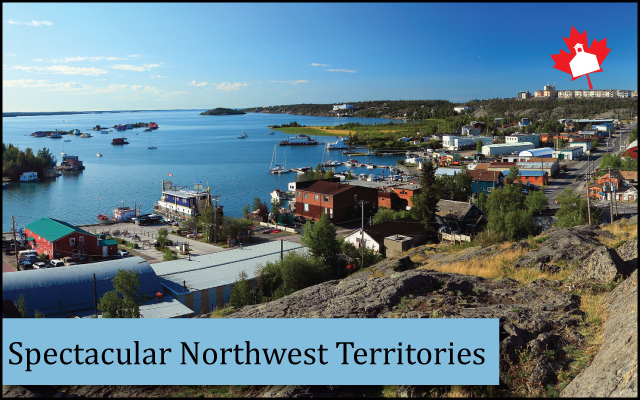 The Northwest Territories is located north of the central Canadian provinces and is bordered to the west by Yukon and to the east by Nunavut. It is the most populous of the three territories. There are three geographical regions that make up this territory: the arctic archipelago, the arctic mainland, and the Mackenzie Valley area.

The arctic archipelago consists of 94 major islands, some of which belong to the Northwest Territories. This region is above the treeline meaning that there is too much permafrost for vegetation to grow. Inhabitants of this part of NWT rely on other means for their food. This region is cold, even in the summer, with high temperatures averaging around 10 degrees Celsius.

The arctic mainland is a part of the Canadian Shield. As with the archipelago, this area is mostly tundra which limits vegetation. There are some shrubs and stunted trees in some areas, but most of the landscape is rock instead of soil.  This region experiences harsher temperature swings, with colder winters and warmer summers than the archipelago.

The Mackenzie Valley area is a region that includes the Interior Plains, the Canadian Shield, and even mountains of the Cordillera region. It includes a permafrost zone in its northernmost region as well as a boreal forest transitional zone. Great Bear Lake and Great Slave Lake are in this region as well as Wood Buffalo National Park, which is at the southernmost border. This region has greater economic development and a larger population than the other two regions.

The Northwest Territories is an interesting place as there is a vast difference between not only the landscape and people groups but also their ways of life. The more northern and remote villages live much more true to their indigenous ancestors' way of life and live much more reliant on the land. Yellowknife and some of the more southern towns and villages are more populated, more commercial and do not utilize the traditional ways of life as much. Many communities, such as Ulukhaktok, are fly-in communities only and survive off what is available in the community as well as what can come in by barge once a year. One of the beauties of the Northwest Territories is what we can learn from the people there about appreciating and utilizing our natural land and resources.

The Northwest Territories is rich with Canadian history. The original inhabitants were the Indigenous groups of Dene, Inuit/Inuvialuit, and Metis. These groups of people lived off this land with what they could hunt, find or make for many years. They learned to survive the elements and use the resources available to them. The extending of the fur trade north in the late 18th century led to the first non-indigenous presence as they established trading posts in the far north. The Queen Elizabeth Islands were not used as a permanent settlement until after World War I.

The Northwest Mounted Police was founded here in 1873 to combat the presumed lawlessness in this region. This later turned into the Royal Canadian Mounted Police that still police all regions of NWT today.

In 1999, Northwest Territories was split to have some of their land used in the creation of the territory of Nunavut.

The urban centre of Yellowknife began as a gold mining centre in the 1930s. By the late 1940s, there were three operating gold mines there. For approximately the next 50 years, these gold mines were the economic mainstay of the region. Active mining in this region ended in 2003, and since then, environmental clean-up has been underway.

Industries of the Northwest Territories

There are many industries represented across the vast land of the Northwest Territories, some being specific to a certain region. Some of these industries are

Favourite Foods in the North

The foods of this northern territory show the same diversity as many of its other aspects. Whether it’s hunted, foraged, dried, boiled, baked or raw, these Northwest Territory specialties speak to the resiliency of the residents and the land.

Bannock – Although this is not technically considered a traditional food because flour isn’t locally harvested, bannock (as well as “Eskimo donuts”) are very popular in the north. Typically cooked over an open fire, bannock is a simple bread that is as comforting as it is delicious. Every region has their own way of making it, and those slight variations make eating it a different experience everywhere you go.

Quak (frozen meat) - You can eat “quak caribou” or “quak char,” etc. This is raw frozen meat that is a traditional and common food in the northern villages.

Mikpu - This is dried meat typically made from moose or caribou, which is a traditional food in the northern villages.

Berries - Cranberries, cloud berries, blackberries (They look like blueberries, not what we would think of as blackberries.), blueberries and haskups

Even in the larger centres, you will see many of these ingredients used in their dishes, although prepared in different ways. Pulling in a beluga whale in Ulukhaktok.  This is a community event where the whole community comes out and celebrates and the whale is then harvested right then and there on the beach and laid out and shared around.  Eaten raw and dry.

The tourism opportunities in Northwest Territories aren’t as widely known as they deserve to be!  If you live in the north of the provinces that border NWT, it is an amazing camping and hiking destination that also includes beautiful beaches. Even if you aren’t planning a trip to the Northwest Territories anytime soon, these popular travel destinations are still good to learn about and understand the unique features of God’s creation. Here are a few of the most popular attractions, and you can visit this tourism site to learn about more.

Great Slave Lake - Can be accessed from different communities in NWT and is so large it feels like an ocean even though it is a freshwater lake. Both Hay River and Yellowknife have vast and beautiful sand beaches where you can enjoy swimming in Great Slave Lake during the summer months. In Hay River, so much driftwood washes up, it is an adventure all on its own!

Aurora Village/Northern Lights Tour - (seasonal) This guided tour includes a drive out of the city to get the best possible views and includes hot drinks and snacks. Check out the Aurora Village to get an idea of this breathtaking experience.

Wood Buffalo National Park - Canada’s largest national park (and the second largest national park in the world) is located in both Alberta and the Northwest Territories. This park was established to protect the world’s largest herd of free roaming bison. It is known for things like large freshwater deltas, sinkholes, springs and bison. Year round access is available.

Alexandra Falls - This beautiful 32 m waterfall is located off the highway close to Hay River. It forms part of the Twin Falls Gorge Territorial Park and has a day use area with a couple lookout decks. Louise Falls (the second of the Twin Falls) is 3 km away by trail and has a campsite.

Great Bear Lake - Is a lake located in the Canadian boreal forest and on the Arctic Circle.  It is the largest lake which is entirely in Canada and the eighth largest in the world! This lake is known for being extremely clear and allows a person to see to great depths. There is an ice crossing on this lake in the winter, and the lake is also used for hunting and fishing. Lake trout are commonly caught here.

Camping - Many communities boast stunning territorial or privately owned campgrounds where the sites can be surrounded by trees and/or on the rock face as some communities are above the tree line.

Tuktoyaktuk - The most northern settlement on the mainland and is home to the pingos which are upside-down frozen lakes.  They force the ground up and make a big hill. Caribou herd on the Dempster Highway Learn more about the Northwest Territories with your children with these resources:

Take this quiz with your kids and see how you do!

This article has been written by homeschooling staff writers of The Canadian Schoolhouse (TCS) with input from residents of the NWT. Enjoy more of our content from TCS contributors and staff writers by visiting our Front Door page that has content on our monthly theme and links to all our content sections.