The Scenery and Signature of Ontario 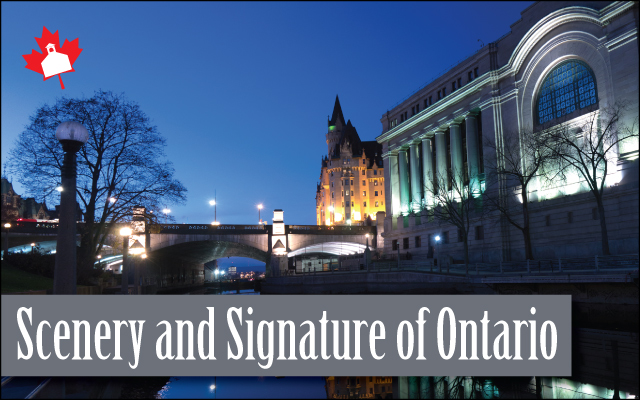 The province of Ontario has much to offer for tourists and residents alike. The vast land contains 3 of the 7 Natural Regions of Canada: Hudson Bay Lowlands, St. Lawrence Lowlands and the Canadian Shield. With the country’s capital, Ottawa, near the eastern border of the province, the regions’ abundant and distinct landscapes, and the concentrated areas of lakes and rivers, there is a favourite destination for everyone.

Ontario has the highest population with almost double the number of residents than the second highest populated province Québec (even though Québec has about 180,000 more square miles of land). Southern Ontario is highly populated with many urban centres but still home to many quaint villages and popular tourist towns. Central and northern Ontario is most known for its expansive nature parks, spread out communities, and cottage country lifestyle.

The land we now call Ontario borders four of the major lakes, Hudson Bay and the St. Lawrence seaway, which made it a popular spot for First Nations as well as immigrants to settle on the land. One of the earliest explorers to claim land was Henry Hudson who claimed the area around what is now known as Hudson Bay in the early 1600s for Great Britain.

In the late 1700s, the most southern parts of Ontario were officially named Upper Canada while the mainly French-speaking Québec was called Lower Canada. Ontario was one of the first four provinces of the Confederation of Canada in 1867, along with Québec, New Brunswick and Nova Scotia.

There are many hot historical spots in Ontario. Here are a few of the wartime and political sites that can still be visited today.

Now an Ottawa landmark that spans 202 km, this colossal construction was mainly undertaken for military purposes in 1826 after concerns of weaknesses in defence following the War of 1812. The focus of the design was to allow boats to easily travel from Bytown (now Ottawa) to Kingston, especially the large steamboats that were beginning to appear regularly on the Great Lakes around that time. The construction consisted of forty-seven locks, some of which required engineering excellence to build in the unsettled wilderness of the area. Because of the military focus, the canal also included fortified lock master’s houses and large blockhouses at lock stations to resist enemy attack. The Rideau Canal opened in the Summer of 1832.

The length of the canal now offers varied attractions and historical significance which resulted in a World Heritage Site designation by UNESCO. It becomes the Skateway in the winter, and warmer temperatures allow for canoeing, boating and visiting various sites along the eastern Ontario countryside from Ottawa to Kingston.

This military establishment built during the War of 1812 was constructed to protect Point Henry and the trading route between Kingston and everything to the east. The second fort built in this same location didn’t resemble the original fort but was a restoration project required to fortify and defend the main waterways that intersected at Fort Henry: the Rideau Canal, the St. Lawrence River and Lake Ontario. The second fort was built between 1832-1837, a continued military effort connected to the Rideau Canal construction.

Today, you can visit this museum and historic site to take in the time of 19th century military life through guided tours, musical performances, military demonstrations, and re-enactments of civilian life of the fort.

In the country’s capital, you can explore one of the finest examples of High Victorian Gothic Revival architecture infused with Canadian flavour by gothic ornaments and local materials.  The Parliament buildings are made up of three sections: the Centre Block which joins the Library of Parliament and the Peace Tower, the East Block, and the West Block, both of which are administrative buildings.

The grounds of Parliament Hill are as much a sight to see as the inside of the buildings. The landscape includes formal and informal areas with commemorative statues of political and royal figures along with the Centennial Flame erected in 1987 to mark 100 years of confederation.

Enjoy a virtual tour of the parliament buildings at the Parliament of Canada website.

BeaverTails – A hand stretched pastry, deep fried and coated with your choice of toppings. There’s the classic cinnamon and brown sugar, elaborate fruit and chocolate sauce concoctions or a maple bacon blend. Toppings for BeaverTails can be as varied as the Québec native dish poutine! Although BeaverTails can be found all over the world now, Ottawa is its home and native land.

Maple Syrup – The golden gift of maple trees is abundant in Ontario. While Québec is the largest producer of this sweet sap, Ontario still has a strong reputation in the industry. Lanarck County is considered the Maple Syrup Capital in Ontario, but sugar bushes and maple syrup festivals can be found throughout most of Ontario.

Corn on the Cob – Sweet corn is the delicious taste of mid-summer in Ontario. Local corn starts hitting the markets and roadside stands near the end of July and keeps coming throughout most of August. It’s a seasonal highlight and just one of the popular crops of the agriculturally rich land in southern Ontario.

Peaches – The Niagara region of Ontario produces the majority of the nation’s peach crops in the fertile soil that is also well-known for its grapes and wineries. Norfolk County in Ontario and the Okanagan Valley in British Columbia have the other sweet spots of land and climate for growing peaches.

Peameal Bacon – The one food that made our list that doesn’t have a sweet touch, but it’s a salty equal and worthy to make the list nonetheless. This wet-cured pork loin is from the back of the hog and is trimmed of fat and rolled in cornmeal. This isn’t actually what is classified as Canadian bacon which is confusing for Canadians especially. The Food Network has more details about the history side of this cut of meat, but it’s origin story starts in Toronto, nicknamed “Hogtown” for its lively history in pork processing and packing.

The Attraction to Ontario

There are many different types of attractions in Ontario around entertainment, natural locations, road tripping and cultural events. Check out the resources below to guide you to the type of interests you and your family have or see them all to get the wide and wonderful vision of all that is Ontario.

Atlas Obscura has a compilation of 107 things to do in Ontario. From unique little shops to grand natural parks, you’ll possibly be overwhelmed with the options. It is all well organized though and a great place to scroll and be intrigued by all there is in the province. You can also filter by city.

Attractions Ontario is your road trip planner. Use this as a ‘learning about Ontario’ tool or get planning your next family road trip around Ontario. You can search around this site for every type of event and activity, but the road trip feature is especially a good stop.

Ontario Travel is a division of the provincial government tourism, and they do a good job of showing off and providing more info about the natural wonders of Ontario.

Check out The Canadian Encyclopedia for an in-depth read and study material of Ontario.

For younger children, KidZone has basic facts, worksheets and additional resources for a well rounded unit study on Ontario.