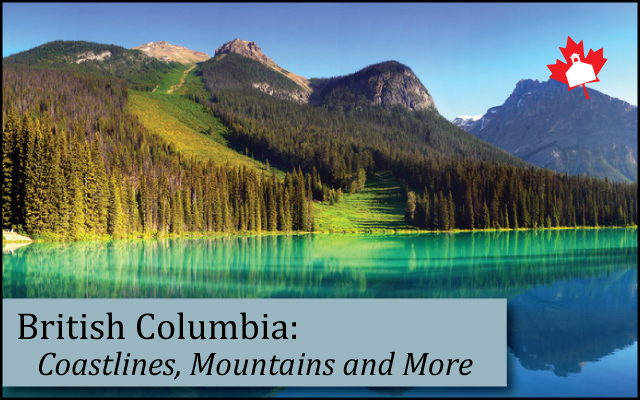 Nestled between mountain ranges, the plains, mountains, and ocean make this province a destination of its own. The beauty of the variations in land and view make every part of British Columbia a little different.

Being one of the last areas of North America to be explored, this wonderland of beauty is booming with resources, such as forestry and mining, and has become the third most populous province.

As with most of Canada, British Columbia’s history begins with the First Nations people. The link is found in everything from city names to fjords. Even their customs and festivals are interwoven into the British Columbian lifestyle.

Explorers from Britain, Spain, Russia, and America began their exploration of the area in the 1750s. It wasn’t until 1849 that Vancouver Island was colonized, and the Gold Rush brought many people to the interior of British Columbia not long after.

In 1871, British Columbia joined Canada as a province, and in 1885 the Canadian Pacific Railway made travel from eastern to western Canada possible. With the completion of the railway, trade, resources, and movement of people became possible throughout Canada.

Famous Foods in the Far West

Nanaimo Bars - Creamy and delicious, these layered cookies with graham cracker, coconut and nuts have a vanilla-butter middle and are finished with semi-sweet chocolate.

Spot Prawns – These wild, sustainable, sweet prawns are the largest shrimp in the Pacific Northwest. In Vancouver, there is even a festival, the Spot Prawn Festival.

BC Roll - Sushi at its finest! The BC Roll takes sushi rice, barbecued salmon and cucumbers and makes a delicacy that was invented in Vancouver as a substitution for eel. BC Sights to See

Whistler – Home of the 2010 Winter Olympics, Whistler is nestled at the foot of the Whistler and Blackcomb Mountains. Ski, snowboard, hike, mountain bike, golf, and just explore. Whistler offers natural beauty for any outdoor lover.

With abundant natural beauty, British Columbia is a nature lover's paradise. With lots of land along the coastline, this province is a sight to be seen.

Lots of facts about BC on Kiddle

Fun Video for kids on the regional districts of BC