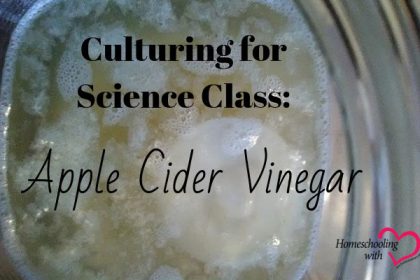 One day, I pulled a bottle of apple cider vinegar out of my kitchen cabinet (the kind that says “with the mother” on the label) and noticed that the small pieces of mother had formed into a solid that resembled a SCOBY. A SCOBY is a symbiotic colony of bacteria and yeast that is used to turn tea into a fermented drink called kombucha. As time went on, more and more mothers grew in the bottle. I showed them to my children, and they were intrigued. It ended up looking like this: Having made kombucha before, I was curious if we could use them to make our own batch of apple cider vinegar, so I did some research online. I discovered there are several methods that you can use, and most don’t require a solid vinegar mother. I decided to make ours from apple scraps. The steps that we followed were:

We enjoyed learning about how apple cider vinegar is made. If you use ACV in your home, I encourage you to give it a try!