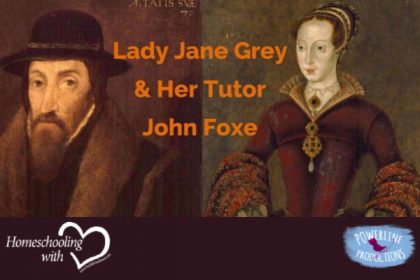 Lady Jane Grey, the granddaughter of Henry VIII’s sister, grew up in a big fancy castle with a private tutor. His name was John Foxe, and he had a beautiful influence on her life as she had on his.

Who is Lady Jane Grey?

To discover who Lady Jane Grey is let me take you back before she was born.

Henry VII was King of England after the War of the Roses ended. He married the beautiful daughter of his enemy, Elizabeth of York, combining the warring families into one. He had four children that survived infancy: Arthur who died before taking the throne, Henry VIII, Margaret who married Scottish royalty and became the mother of Mary, Queen of Scots, and Mary who was Jane’s grandmother.

Jane loved Jesus with all of her heart. She created a little prayer journal filled with the prayers of godly church fathers like Saint Ambrose, Saint Jerome, and Saint Augustine that she kept with her.

Jane grew up in tumultuous but exciting times. You see, all over Europe the Reformation teachings were spreading from Germany and Switzerland to other nations. During her younger years, the king of England was Henry VIII who pulled England out of the Roman Catholic Church but not for the best motives. He just wanted to divorce his first wife. However, his sixth wife Catherine was a lovely lady, and she had a powerful influence over King Henry VIII. During their marriage, the court was filled with godly men and women teaching truth from Scripture.

The next king of England was Henry VIII’s son and Jane’s cousin Edward VI, who is often called “The British Josiah” after the godly King Josiah of Israel. King Edward VI loved Jesus with all of his heart. He was a very young king, but he was surrounded by wise men and he ruled well. Who Was Her Tutor?

John Foxe was born into a noble family and grew up to be a brilliant scholar in Latin, logic, Canon law, history, and Greek. Even at a young age, he was a devout Christian and loved to study!

Studying to be a priest, he resigned from his Oxford post when he became a Protestant and changed his views on celibacy.

A warm and friendly man, John was perfectly cut out to be a private tutor, as well as a college professor. So, he changed careers and became a tutor to wealthy noble children.

What Did John Teach Jane?

Jane loved to hear John’s stories of Christian heroes from the olden days. She was also a diligent student of the Scriptures. John loved the Word of God, and he taught her theology, hermeneutics, and doctrine. They spent hours digging into the Word.

He taught Jane in the classical education style that was popular during that time. He instructed her in Latin, Greek, Hebrew, the classics, literature, languages, logic, history, government, and the arts.

He inspired her already embedded love of learning with his enthusiastic nature.

How Did Lady Jane Inspire John

Jane was delighted to have John as her teacher because he loved to learn as much as she did.

She especially enjoyed hearing about early Christians and their ministries. When John told her the stories of the heroic Christians who clung to their faith in Jesus to the death, she encouraged him to put all his stories down on paper and write a book so that others could enjoy them too.

What Happened to Lady Jane Grey?

Unfortunately, Jane’s cousin King Edward VI got very sick, and he was worried about who would take the throne next. You see, his sister Mary was Roman Catholic and would bring back Catholicism. Edward wanted the Reformation to continue in England. So, this is what he did. He named his own heir to the throne in his will. And guess who he named?

With fear and trembling, she ascended the throne at the age of sixteen, only to fulfill her duty. She was terrified! Her rule lasted for nine days. King Edward’s sister Mary gathered an army and stormed the castle. Young Jane and her husband Guildford were arrested and thrown into prison, along with both of their fathers. Guildford’s father was executed, and Jane’s father was set free. But when Jane’s father tried to overthrow Queen Mary again, this time he was executed. And Guildford and Jane were executed, too.

Jane was frightened. She was a young lady who had already married and been crowned queen. Now, she would face execution at the age of sixteen. She spent all her time praying and asking God for strength. She read her Bible over and over. By the time she had to face her horrible fate, she felt strong in the Lord. She carried her special book of prayers she had made as a little girl and gave it to her executioner as an act of forgiveness. She told the executioner she forgave him, recited a psalm, and declared, “Into your hands, I commit my spirit” right before she died.

What Happened to John Foxe?

John Foxe had to flee from England when Queen Mary I took the throne because she began to persecute Protestants. He and his wife fled to Antwerp, Rotterdam, Frankfurt, and Strausbourg in Germany. In 1554, John and his family moved back to Frankfurt where he pastored a church of English refugees. His next stop was Basal, Switzerland, where he wrote and edited books for other writers.

When Queen Elizabeth I took the throne, John and his family were able to return to England and continue their ministry of writing and teaching.

John remembered Jane’s advice and wrote a book about Christian heroes. It is still read today: Foxe’s Book of Martyrs. Guess who was in his book? That’s right. Lady Jane Grey’s story is inside the pages along with a number of amazing men and women who have given up their lives because they loved Jesus. An enthusiastic student can inspire a teacher to do great things, and an excellent teacher can instill in his student enough trust in the Lord to endure horrible persecution, even at a young age.

Ultimately, all of us, including homeschooling parents and their children, have a mission from God. We can inspire one another to fulfill our purpose in Christ for the glory of God just like Lady Jane and John Foxe did for one another.

I have some resources for you!

What does it take to be a Hero for Jesus?

Meredith Curtis, homeschooling mom, writer, speaker, and publisher, loves to encourage families in their homeschooling adventure. She is the author of Travel God’s World Geography, Celebrate Our Christian Heroes,  and HIS Story of the 20th Century. You can check out her books, curricula, unit studies, and Bible studies at PowerlineProd.com. Free Reading Lists for all ages are available at JSHomeschooling.com. Read her blogs at MeredithCurtis.com (http://www.meredithcurtis.com/blog) and PowerlineProd.com and listen to her at Finish Well Radio.