When God Doesn’t Give All the Pieces 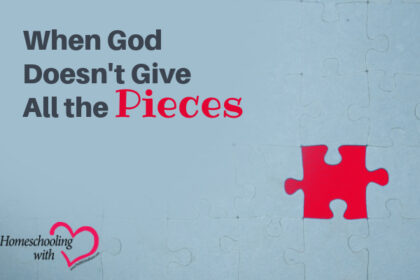 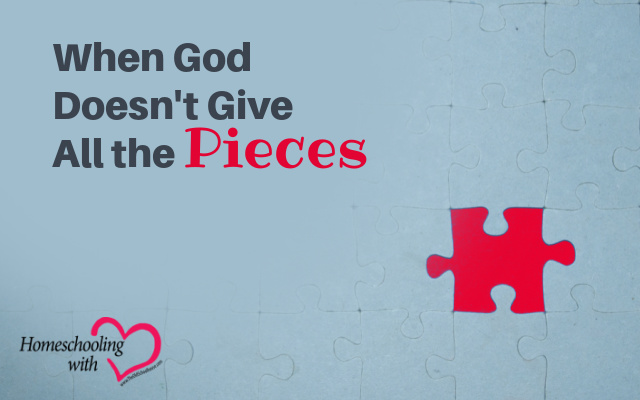 Most of us are familiar with the story. God rejects Saul as king over Israel and sends his faithful servant Samuel to anoint a new leader.

“Fill your horn with oil and go…” God tells Samuel. “I will send you to Jesse the Bethlehemite, for I have selected a king for myself among his sons.” (1 Samuel 16:1 NASB)

Samuel obeys, though with fear and trembling, terrified of what Saul might do. But he doesn’t shirk from his responsibility. Instead, he asks, “But how, Lord?”

And the Lord leads him, step by step. “Offer a sacrifice, invite Jesse to come, and I will show you what to do…” (16:3 NASB)

So Jesse brings out his first son, Eliab, and Samuel thinks, “This must be the one,” but as he stands before the Lord, the Lord says, “Not this one.” Jesse brings six more of his sons before Samuel, and with each one, God speaks, “Nope, not these either.”

It makes you wonder—why couldn’t God just tell Samuel everything at the beginning? Why didn’t he say, “Go to the house of Jesse and anoint David”? It would’ve been much easier. He could’ve told him he’d be in the fields, that he’d be missing when he first arrived. He could’ve given all those specifics, saving Samuel so much time, embarrassment, and trouble.

But God often has a higher way for his children. More than an easy path, God desires his people to come, to inquire, and to fellowship with him.

“How often I longed to gather your children together,” the Lord cried out to Jerusalem, “but you were not willing.” (Matthew 23:37) God desires hearts that are united with His. He’d rather us walk this uncertain way with him, fumbling through and making mistakes, than to know every detail perfectly and plow straight ahead on our own. In the Sermon on the Mount, the Lord shares this with his disciples. “Blessed are the poor in spirit,” we often read, “for theirs is the kingdom of heaven.” But in this case, I wonder if the simpler, paraphrased rendering expresses this verse best: “Blessed are those who know their need of God; the kingdom of heaven is theirs.” (NET)

Of course, God knew David was his chosen king. And he knew long before Samuel’s arrival. But he only gave Samuel a part of the story: “Go to the house of Jessie” and “It will be told to you what to do.”

If the Lord revealed the entire puzzle at once, we wouldn’t need Him. We’d have no reason to return and fellowship with Him. We’d have “the knowledge of good and evil,” but no experience feasting from that “tree of life,” continually returning to our Creator, the One who knows that the very best thing for us is to be kept near to Him. (see Psalm 73:28)

And so, God gives Samuel only a piece. And when he arrives in the house of Jesse, he gives him the next piece. Of course, Samuel gets thrown off and thinks Eliab is the right choice, and sometimes, as we try to follow the Lord, we get a little off course, too.

But as we abide with Him, and He in us, we have fellowship with Him. Like Samuel, we keep that slight hesitancy and keep inquiring, “Lord, is it this way? Is it this one?” He speaks just enough to stop us, and we’re able to keep going. Soon more options appear. And even though the way is not yet clear, the Lord is faithful to speak when needed.

As Samuel walks this out with the Lord, somehow he knows to ask, “Is there another son?” David is hurriedly brought from the fields, and the Lord speaks again, “Arise, anoint him, for this is he.” (16:12 NASB)

Could God have told Samuel straight from the beginning? Of course. But what glory, what privilege, what an increase of faith, to have gone this whole way with the Lord step by step. As Samuel listened to the voice of the Lord at each turn, the Lord made his path clear. Imagine how Samuel’s faith increased after all of this! Imagine how much more he trusted God, having proved his faithfulness? Imagine how much more God could now entrust to Samuel, having found him faithful to continually inquire and listen for His voice?

Oh, the glorious ways of our Lord. He is always for us, always working on our behalf. Even in His delay, even in our desperation. Oh Christian, if the future is unknown. If you’re in the middle of a crisis and it feels the entire kingdom is shaking and you don’t know what the future holds beyond today… praise God, He knows. He knows the ending. He knows all the pieces that you need to make it to the King. And as we yoke with Him, as we cast ourselves upon Him, as we look up and say, “Lord, is it this way?” At just the right moment, He speaks. We fellowship with Him, and He reveals the next step.

We may want more answers; we may think He doesn’t speak fast enough. But His delay keeps us returning to Him, near to His heart, knowing our need for Him. And friends, is there any better place to be? 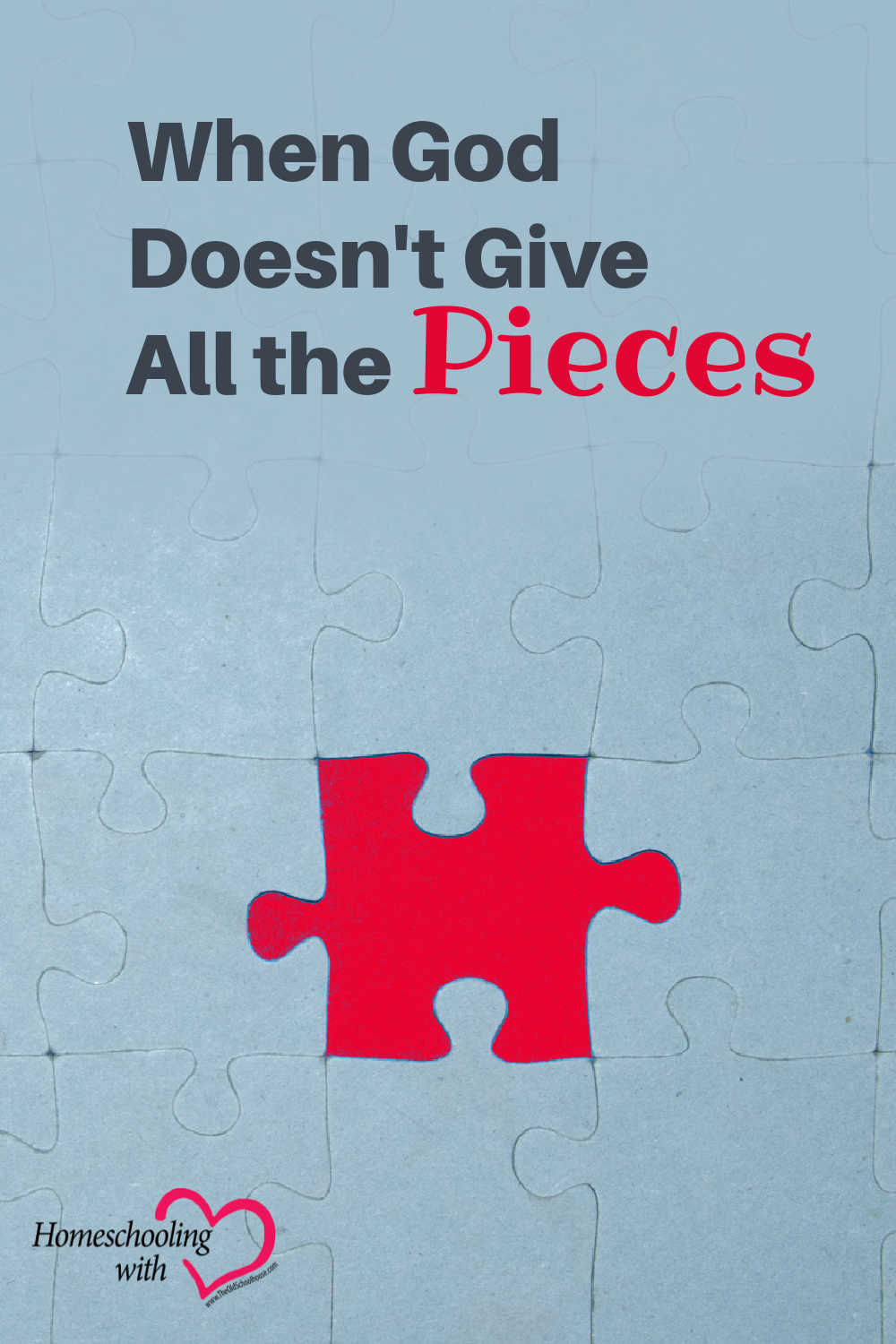 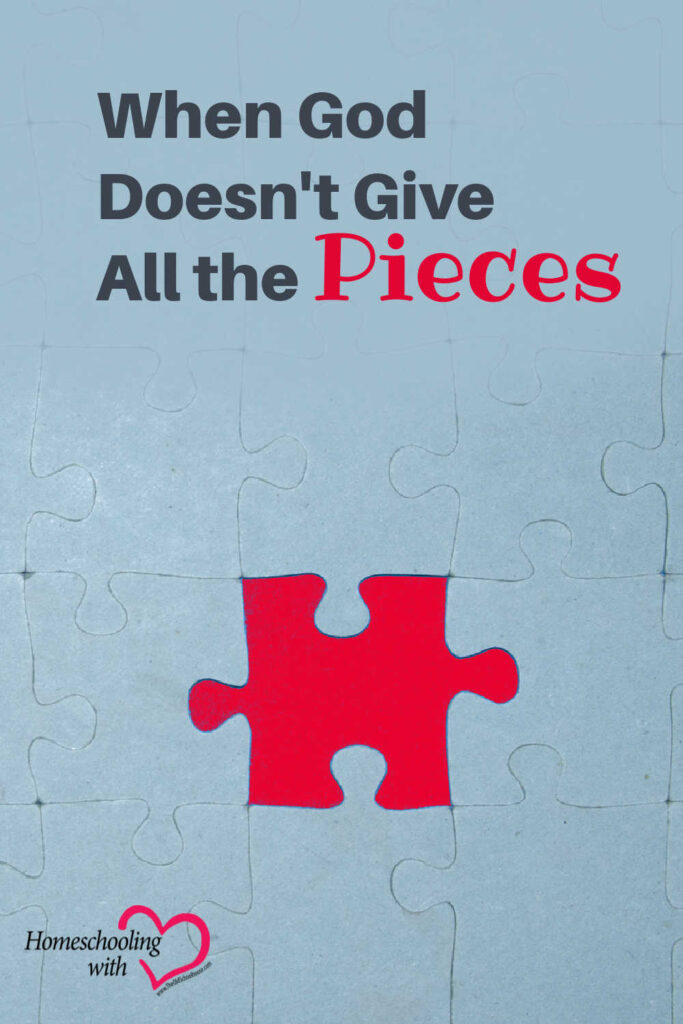