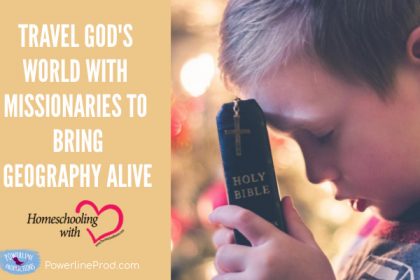 Meeting missionaries in our geography studies has been such a blessing to my family. We love geography to begin with, yet when you add the missionaries, other countries become so alive.

“Children, here is a nation that God loved so much that He sent His Son to the cross and missionaries to reach them with the Good News.” People become so precious in our children’s hearts when we realize how much the Lord loves them. Then, we want to know all about them and the country they live in.

When we are studying a continent or country, we choose 1 or 2 missionaries who traveled to that country.

I like to talk about where the missionary grew up and how they got to the country God called them to serve. We find those places on the map or globe.

For example, Amy Carmichael served in a few different countries before she ended up in India for health reasons. Hudson Taylor ministered in different parts of China.

Let me give you some examples.

Two weeks after their wedding, Adoniram and Ann got on a ship to India and on to Burma, now called Myanmar. Ann became fluent in Burmese and tirelessly labored to win the lost. Adoniram painstakingly translated the Bible into Burmese. He endured starvation, imprisonment, and torture for the sake of Christ. Ann died early as did Adonriam’s second wife. Life in Burma was hard physically.

The Life of Adoniram Judson by Edward Judson

Raised in a devout Christian home, Hudson rejected his parents’ faith until he was 17 when he was radically converted. He felt a call to China soon afterward so he trained to be a doctor. His mission work in China was filled with trials and discouragement until he married Maria. They went on to found the China Inland Mission and reach the Chinese people with the Gospel.

The Spiritual Secret of Hudson Taylor by Howard Taylor

We often think of Eric and his heroic choice to not run on Sunday due to his Christian convictions. We rejoice that Eric left the Olympics with a gold medal!

Did you know that Eric returned to the mission field where he grew up? Yes. He returned to China with his wife and daughter. When the Japanese invaded, he sent his family home, and he was placed in a Japanese internment camp. Because he was a hero, the British arranged for him to come home, but he gave up his spot to a pregnant woman. Eric died in that internment camp, but to the end, he preached the Gospel and loved those around him with the love of God.

Eric Liddell: Something Greater Than Gold by Janet & Geoff Benge Amy and her family were devoted to the Lord and she felt a call to missions, but poor health kept her from going. She headed to Japan, got sick, and came home. Next, she tried Sri Lanka, but poor health forced her to rest in India. India was where the Lord was calling her for her amazing adventure! Amy rescued girls and young women from the Hindu temple where they were forced to live as prostitutes, earning money for the Hindu priests.

A Chance to Die: The Life and Legacy of Amy Carmichael by Elisabeth Elliot

The Gold Cord by Amy Carmichael

Things as They Are: Mission Work in Southern India by Amy Carmichael

The son of missionaries, Paul became a doctor and headed back to the land of his birth. Dr. Brand practiced medicine and trained future doctors. He became famous worldwide for his innovations in the treatment of leprosy. He restored fingers, limbs, and toes while his wife his treated leprous patients that became blind. They were a pair who loved people for Jesus by sharing the Good News and making life better for suffering patients.

A missionary doctor, Helen arrived in a tumultuous time in Congo’s history with a vision to train nurses to help care for the sick and wounded. She was tireless and fearless. She was also anointed by the Lord to treat sickness, especially in children. Throughout the unrest, political turmoil, and uncertainty, Helen staying in the Congo caring for the people she loved.

About to marry a pastor and enjoy a comfortable ministry in the USA, Lillian felt a tug from the Lord to go to Africa as a single woman. She and her sister went to Egypt where she started the first orphanage in Egypt. She continued to serve there the rest of her life, even through Nazi occupation.

When his childhood was rudely interrupted by Nazi occupation in the Netherlands, young “Andrew” tried everything to sabotage the Germans at every turn. When the war was finally over, he joined the Army but was wounded. When he returned, he lived to party, but one night, Jesus captured his heart and his life was changed forever. He attended Bible school, but an impromptu trip to Communist Russia changed his life. He snuck away from the “host” and saw the real impact of communism on the poor Russian people. He began to speak out against communism in the West, sharing the real hope in Jesus. Over the years, he took many trips behind the iron curtain where he discovered the horrible suffering of the underground church in Eastern Europe. Thus began his ministry to the Christians suffering under Communism during the Cold War.

After his conversion to Christ, George Mueller went to London for Bible school but ended up staying, getting married, and starting an orphanage without 2 dimes to rub together. This began a life of trusting God for day-by-day provision. George Mueller’s life is one of extraordinary faith lived out in a string of ordinary days.

Rachel was a seasoned saint who spent her life in Ecuador ministering to folks in the Amazon Rain Forest. Nate, Jim, Elisabeth, and a group of their young friends felt called to reach a cannibalistic tribe with the Gospel in the same location. In their pursuit to win their trust, the men landed their small plane near a river after weeks of dropping gifts from their plane. The men were murdered, leaving widows and young children to piece their lives together. Elisabeth and her daughter Valerie joined Rachel to reach the tribe that had murdered their husband/father.

Through the Gates of Splendor by Elisabeth Elliot

Shadow of the Almighty: The Life & Testament of Jim Elliot by Elisabeth Elliot

Rachel Saint: A Star in the Jungle by Janet & Geoff Benge

End of the Spear by Steve Saint

The Savage, My Kinsman by Elisabeth Elliot

Klaus-Dieter & Martina John were enjoying success in their medical careers when God called them to Peru to build a “Diospi Suyana” or “God is our Hope,” a hospital for Native Americans in the Andes Mountains. Born of God’s miraculous provision, this hospital has a surgical suite, intensive care, lab, and X-ray department. The staff employs a number of Peruvian natives! What a beautiful gift of God tucked away in the Andes Mountains.

Klaus-Dieter John: Hope in the Land of the Incas by Janet & Geoff Benge

I just want to go on and on, telling you story after story of amazing heroes who risked their lives and left their homes to travel to unfamiliar places because they wanted to bring the Gospel to the ends of the world. Get to know God’s heroes so your family can study geography and be inspired at the same time!

Until next time, Happy Homeschooling!

Meredith Curtis, homeschooling mom, writer, speaker, and publisher, loves to encourage families in their homeschooling adventure. She is the author of Travel  God’s World Geography, Travel to London Unit Study, Celebrate Our Christian Heroes, and Travel God’s World Cookbook. You can shop for her books, curricula, unit studies, and Bible studies at PowerlineProd.com. Read her blogs at PowerlineProd.com and listen to her podcast Finish Well at Ultimate Homeschool Podcast. 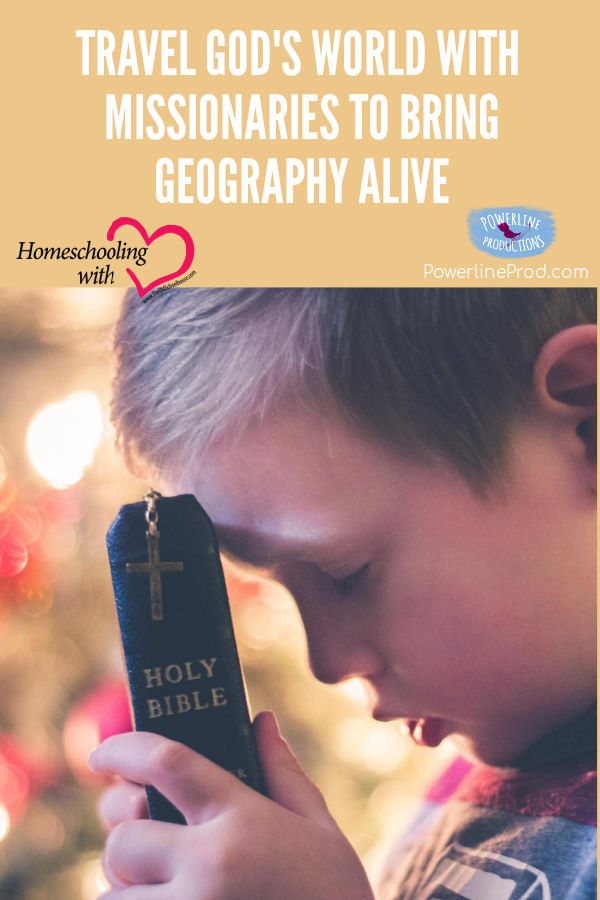