Mamas, Let’s Show Each Other Some Grace 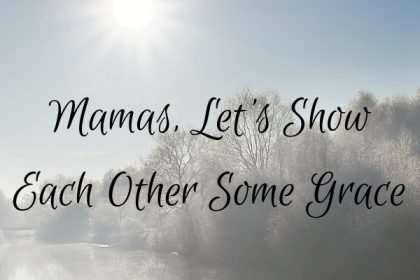 Recently, my daughter’s ballet school had their annual Nutcracker performance.  I volunteered to help the girls backstage for the dress rehearsal and first performance, expecting that I could sit and watch the second show.  However, only one other mom had volunteered, and when no one showed up to help her for the second show, I stayed, because there was no way she could do it all herself.

Twice during the day, I had to comfort a little girl who started crying because she wanted her mother, who I had no way of contacting.  Once was immediately after the completion of the first show.  She kept trying to run into the audience of strangers to find her mother, who had gone to church, so she wasn’t there.  It took some effort to finally calm her and convince her to return to the dressing room with me.

I had a hard time understanding the mom who left her little girl for most of the day, in the care of people she barely knows, when she wasn’t comfortable being left.  I debated if I should mention it to her, knowing that there will be another show in the spring.  I’d want to know if my daughter had been that upset.  I was afraid that she’d be offended, so I decided against it.  I told myself that although I wouldn’t have chosen the same path, perhaps there was a reason she felt that she needed to be in church that day.

When class resumed the following week, the room where parents sit to observe was full, so I found a seat in the foyer to read.  Partway through the class, a woman who brings her grandchildren approached me and told me that my daughter had been looking to see if I was watching her.  Of course, if she was looking for me, I wanted to be there, so I squeezed myself in between two moms who were standing outside the door to watch.  However, the woman continued to bring up what I’d missed, that these moments only happen once, and how important they are.  I began to think that she wasn’t trying to be helpful. She was mom-shaming me! She didn’t know that I’ve been faithfully watching my daughter dance for four years, or that I had to watch her performance from the wings because I was backstage helping her and the other girls all day.  She doesn’t know that I’m with my children all day, homeschooling them, and taking care of them alone at night while my husband is traveling.  She jumped to the conclusion that I’m disinterested in my child over one moment.

That’s when I realized how little grace I was showing in my own heart towards the mom who had left her daughter with us.  Although I told myself to behave gracefully, I wasn’t really treating her the way that I want to be treated.  If I had to give myself excuses why I should not judge her, was I authentically giving her the benefit of the doubt?It didn’t sink in how judgmental I was being until someone did it to me.

Mamas, let’s show each other some grace.  We don’t know the path someone else is walking.  They may parent or homeschool differently than we do, but it may be what is right for their family at this time.  Let’s give others a helping hand when it is appropriate, along with the benefit of the doubt as well.

“Therefore all things whatsoever ye would that men should do to you, do ye even so to them: for this is the law and the prophets.”– Matthew 7:12