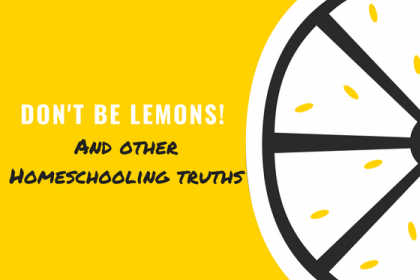 This year will be our 11th year of homeschooling. One would think I’d have all my ducks in a row by now, but my ducks tend to be freethinking, hyperactive ducks. Every year has been a new adventure and I’m thinking that my 11th year won’t be an exception. Ironically, as the mother of one beautiful, teenage boy, it is also the second to the last year of homeschooling, though I’m thinking of ways he can live with me forever. I am that momma.

My attentions have been turning towards what this new year will look like. At least, I don’t begin a new school year with grandiose ideas, every year, like I once did. I’ve come to accept certain realties, such as, if it can happen, it probably will. “It” being the unexpected, and my expectations are negotiable.

I do have a few truths to pass along as most of us hunker down for a new year.

There are a few things that I am certain about as we begin our new school year, and the second to the last year of our homeschooling journey: that composition books always make the best planners; that we enjoy a good set of sparkly gel pens at my house; that by October, I will be ready for our winter break; and that I might actually be getting good at this.

Rebekah Teague is the homeschooling mama to one busy and beautiful boy. She is married to The Muffin who is a pastor and a really great guy. In her spare time she can be found with a book and a cup of tea. She blogs at There Will Be A $5 Charge For Whining

Share on FacebookShare on PinterestShare on LinkedInShare on TwitterShare on PocketShare on Email
Tagged under: dont be lemons, homeschool, homeschooling, rebekah teague