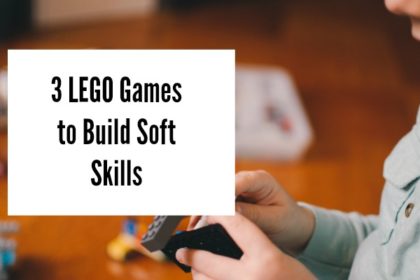 My kids love building with LEGOs. They have many different sets and will play for a couple of hours nearly every day if I let them.

Whenever I bring LEGOs into our homeschool, I instantly have everyone’s attention. They’re eager to listen to the instructions and see what they get to do with the construction bricks.

If your kids also love LEGOs, here are three games you can play. While they’re busy having fun, your kids will also be practicing important soft skills. They’ll work on the following:

These soft skills are so essential for life! So, grab some bricks and give these games a try.

LEGO Game 1: Only One

All players work together in this game. Their goal?

To build something amazing!

The catch? Each player can add only one piece on his turn. And, the players can’t talk about what they’re going to build beforehand.

• LEGOs in a variety of sizes and colors

• A base plate to snap the build onto

Set out your LEGOs and base plate where everyone can reach. Then, set the timer for 5 minutes.

The youngest player goes first. This person selects a LEGO piece, and snaps it onto the base plate.

The next player takes another brick, and adds it to the first. Players continue adding bricks, one at a time.

When the time is up, have everyone sit back and look carefully at the build. What was made? Does everyone see the same thing, or could it be multiple things?

Spend a few minutes talking about the build before taking it down and playing again.

For this game, the builder announces a category before putting bricks together. Then, the other players must guess what is being built. Can they guess before the builder is done?

• A variety of LEGOs

Place the LEGOs on a table, and select one player to serve as the first builder. The other players need to be able to see the builder but not interfere with the building process.

The builder announces a category (see list below for ideas) and silently decides what to build. This player begins building.

The other players try to determine what object is being built. They call out their guesses, until they guess correctly.

If the builder gets done and no one has guessed, three clues may be given to help. If no one can get it at this point, the builder tells everyone the answer.

LEGOs can be sorted many ways. They can be sorted by color, size, set, or shape. In this game, one player starts sorting and everyone else tries to guess the sorting category.

Dump your LEGO bricks out on a towel. This makes cleanup easier! Then, select one player to go first.

One person looks over the bricks and secretly picks a sorting method. This player begins pulling out bricks that match this method.

The other players watch and try to decide how the bricks are sorted. But, instead of guessing orally, a player grabs another brick that fits the pattern and shows it to the sorter.

The sorter answers either “yes” or “no” to each brick he is shown. This helps the other players learn more about the pattern.

Once the players have figured out how the bricks are being sorted, they announce what it is. Then, switch roles.

Create Your Own LEGO Games

Bring out your LEGOs, and encourage your children to each make up a game. Then give each game a try.

There are so many ways to play with these bricks! And, while your kids are playing, they’ll be building those soft skills.

Lisa Tanner is a homeschooling mom of eight. She loves writing about balancing diapers and deadlines, and ways to make learning fun.

Share on FacebookShare on PinterestShare on LinkedInShare on TwitterShare on PocketShare on Email
Tagged under: 3 lego games to build soft skills, homeschool, homeschooling, lisa tanner