Teaching on Historical Figures Like Scripture Does – Part Three 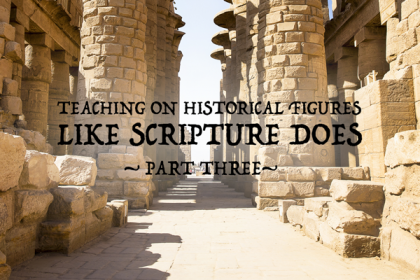 The Life of Moses: Race and Pace in Storytelling

Not only does scriptural history teach us about the hearts of the men and women God used to make history, it also employs a mechanism known to storytellers as race and pace. Race and pace is the rhythm of a story. For example, in the life of Moses, we have a detailed account of his parentage, birth, and rescue, as an infant, by Pharaoh’s daughter. This is called pacing, slowing down, and judiciously focusing on the vital points of a historical figure’s life. Race, however, becomes the word for Moses’ childhood and early manhood, as we fast forward to the pivotal moment when the prince becomes a criminal and is running for his life. This is racing, skimming over the nongermane portions of a person’s life until the next pivotal link of the story is reached. Fiction authors utilize this effective tool to keep a plot moving. No wonder; it was God Who thought of it first.

Moses is also a prime example of the vivid – and sometimes painful – truthfulness of the biblical record. Like every human being, the biblical figures also made their share of wise and foolish decisions.

First, Moses succeeded in what God commanded him to do. The renegade prince turned shepherd stared down the world superpower of his time, liberating his people after four hundred years of slavery. This same man also had extraordinary faith, being the human instrument who divided the Red Sea, penned the Pentateuch and became the George Washington of a people whose influence has touched every continent and every century. In addition, Moses was not only a victorious military commander, but he mentored the great Joshua, who spearheaded the conquest of Canaan. Last, but not least, Moses became a living prophecy of Messiah, being the type whom Christ would fulfill.

If the Bible had been written by men, the stunning triumphs of Moses would be all we had. But because it was inspired by one Who cannot lie, we know Moses was far from a perfect leader, or perfect man. The first recorded act of his adulthood was murder and then hiding it. When discovered, he fled and hid in the desert until God sought him out. Moses then resisted the voice of the Lord, made excuses and begged Him to choose another. At one point, the Lord was so angry with Moses, He nearly killed him. The confrontation with Pharaoh was nearly lost when Moses’ faith faltered in the face of increased labor for his people. And finally, Moses’ disobedience at the rock cost him the privilege of personally leading Israel into their land. Though mightily used of God, Moses still had points of failure. While tragic, truthfully recording human failure is the obligation of the reliable historian. Regardless of the good a historical figure may have accomplished, let’s never hide the truth from our children and not be honest with them about their weaknesses, as well…just like Scripture does.