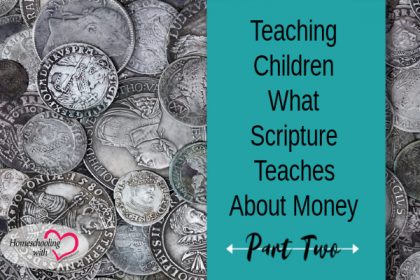 How do we teach children to have a biblical and balanced view of money? Part One displayed how young George Muller went to Scripture to establish his personal finances; likewise, his pattern for ministry would be no exception.

During the same time our young pastor did away with his salary, George and his wife Mary decided to take Luke 12:33 literally, giving all money away after their basic needs were met. Years later, when George began the orphan house project he is now famous for, this truth would dramatically be put to the test. During a time of great need, Muller’s journal records tell us,

“Oct. 10 [1838] The coals in the Infant House are out, and nearly so in the other two houses. Also the treacle (molasses) casks in all the three houses are nearly empty. On this account we have asked the Lord for fresh supplies.

Oct. 11 The “Father of the fatherless” has again shown his care over us. An orphan from Devonshire arrived last evening. With her was sent two pounds five shillings and sixpence. The sister who brought her gave also a silver tea-pot, sugar-basin, and cream-jug, of the weight of forty-eight ounces, having found true riches in Christ. There was also in the boxes nine shillings. One of the laborers (for the orphan house) paid for a ton of coal. We obtained sixteen pounds sixteen shillings for the silver articles. Thus we were helped through the heavy expenses of the following days…Oct. 29 Monday. The Lord has again given us this day our daily bread, though in the morning there was not the least natural prospect of obtaining supplies…Nov. 24 This again has been a very remarkable day. We had as little in hand this morning as at any time, and yet several pounds were needed. But God, who is rich in mercy, and whose word so positively declares that none who trust in him shall be confounded, has helped us through this day also. While I was in prayer, about ten in the morning, respecting the funds, I was informed of that a gentleman had called to see me. He came to inform me that a lady had ordered three sacks of potatoes to be sent to the Orphan Houses. Never could they have come more seasonably. This was an encouragement to me to continue to expect help. When I came to the prayer meeting, about twelve o’clock, I heard that two shillings had come in, also one pound for a guitar, which had been given for sale…Thus the Lord helped us through this day, and with brought us to the close of one more week.”[1] Again, this truth was the fabric of Muller’s life until the end. Other passages Muller sought to obey were, the command to owe no man anything but a debt of love (Romans 13), trusting God to provide all needs to us when we seek His kingdom first (Matthew 6), etc. All promises just as alive in our day as they were when God first breathed them. Promises for us and our children. Promises for our good and His glory.