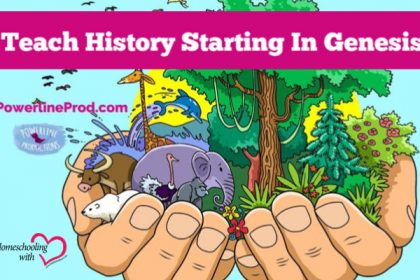 Two things matter to me when I teach history. I want my children to see history as HIS Story, to see the Lord’s hand in all that has happened in the past and will happen in the future. Also, I want us to have a blast as we explore past events, places, and people.

I believe the Bible is true, so we begin our history studies in Genesis, the very first book in the Word of God.

In Genesis, we learn so much about ancient history. In fact, almost 2,500 years of history is covered in one book! We discover how and in what order God created the world. We meet amazing heroes and terrible villains. We discover what ancient man was really like and how diverse languages came to be. We see the perfect world in Genesis 2 and the terrible tragedy in Genesis 3 that resulted in death and destruction on planet earth and in people’s hearts.

We use Genesis in our history class, starting at the beginning with Creation. Then we study the fall and learn how sin, disease, and death entered the world. We also see how God hinted at the Savior that was to come to rescue us from that sin.

Genesis gives us a look at what life was like before the flood. People lived long lives. They played music, worked with iron, and recorded history. The first city was founded by Cain, the son of Adam. Definitely not the “cave-man” picture we were taught in public school.

After reading Genesis, my children and I will talk about what amazing technology must lay beneath the ocean depths, buried by the flood. Can you even imagine what you could create when you live for hundreds of years and your DNA is still so fresh from creation? It’s exciting to imagine!

I am sorry to tell you that as time wore on, the hearts of almost all the people on earth became so wicked that God decided to destroy the earth with a flood.

However, Noah loved God and warned people to repent and be saved. Unfortunately, only his wife and children listened and responded to his preaching. They were saved, but so many souls were lost and all their creations with them. Life was drastically different after the flood. Geologists believe that canyons and valleys were forged by the raging waters of the flood. They point to fossils of marine life found in places like the Grand Canyon. Post-flood earthquakes that warmed the sea eventually led to an ice age.

The animals were released from the ark and repopulated the world, while Noah’s sons started their own families. Lives got shorter and shorter.

Life began fresh, but it wasn’t long before Nimrod led one of his cities in open rebellion against God.

For the first 1800 or more years, everyone on earth spoke one language.

When mankind rejected God’s command to fill the earth; instead hanging out in Babel and building a huge temple/tower to offer sacrifices to idols, God finally had enough. He confused their languages.

Since people couldn’t understand one another, those who shared the same language began to move on to other locations and start new nations. People were finally filling the earth! I am sorry to tell you that many of these people began to serve idols.

Calling Forth His People

The Lord loves people! Longing for a relationship with mankind, God called one man and from that one man, He would make for Himself a nation that would serve Him. In the rest of Genesis, we find the biographies of the Patriarchs: Abraham, Isaac, Jacob, and Joseph. Their lives make fascinating reading with many lively discussions to follow.

So many ancient peoples are introduced to us as we read Genesis like Egyptians, Cushites (Ethiopians), Hittites, Philistines, Phoenicians, Lydians, Babylonians, and Ninevites. We love to take a rabbit trail and learn about those nations as we read through Genesis.

Starting our study of Ancient History with the Bible has given my children a deep respect for God and His Word, as well as a foundational for understanding the rest of history.

As we read, we take time for hands-on fun like building the Tower of Babel out of sugar wafers or renaming the animals for Adam. We also love to act out events in Genesis. After all, history should be fun!

Here are some blogs posts to help you add fun to your history studies.

Teach History with Toys and Games

Meredith Curtis, homeschooling mom, writer, speaker, and publisher, loves to encourage families in their homeschooling adventure. She is the author of HIS Story of the 20th Century, Travel God’s World Geography curriculum, American History Cookbook, Let’s Have Our Own Medieval Banquet, and Ancient History Timeline. You can check out her books, curricula, unit studies, and Bible studies at PowerlineProd.com. Free Reading Lists for all ages are available at JSHomeschooling.com. Read her blogs at MeredithCurtis.com and PowerlineProd.com Listen to her podcast at Finish Well Radio.