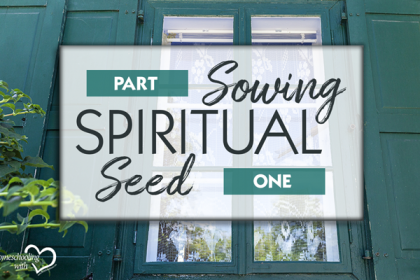 What if you were not guaranteed tomorrow with your children? What if a relative didn’t approve of your faith and snatched away your children? Or what if a premature death cut short the light of maternal influence? What would be the one thing you could teach them that would woo their hearts to Christ? Two such women actually did experience very short windows of influence to sow spiritual seed into the hearts of two boys whose lives would yield a mighty harvest.

He was only about nine years old when Hannah Thornton Wilberforce’s nephew, William, came under her care. When William Wilberforce’s sons recounted the influence of this childless aunt on their father during the two years she had with him, they penned the following:

“In [the house of his Uncle William and Aunt Hannah] he was subjected to a new and powerful influence. His aunt was a great admirer of Whitefield’s preaching, and kept up a friendly connexion with the early methodists…there can be little doubt that the acquaintance with holy Scripture and the habits of devotion which he then acquired, fostered that baptismal seed which though long dormant was destined to produce at last a golden harvest.”

It was the days that revivals were sweeping across England under the preaching of George Whitefield and John Wesley, during a time when being Christian meant precious little difference between being godless. The sermons of Whitefield and Wesley would be much what we would call evangelical today, but in Hannah Wilberforce’s day these adherents were called “methodists”. This tiny spark in William’s soul would soon be quenched and by none other than his own mother and grandfather once they sniffed change in the air. As an only son, William would be the heir of both his mother and grandfather’s fortunates and great hopes were cherished for his future. Since evangelicals were held in great derision the news that William was under their influence stirred a strong enough reaction in his grandfather to say, “If Billy turns methodist he shall not have a sixpence of mine.”

In a fury William’s mother rode to the Wimbleton home of her sister-in-law and took her son back – much to the distress of the household.

“I deeply felt the parting for I loved them as parents: indeed I was almost heart-broken at the separation.” would be how William summed up his emotions as a twelve year-old returning to Hull, “where it became the object of his friends by the seductions of gaiety and self-indulgence to charm away that serious spirit which had taken possession of his youthful bosom…the theatre, balls, great suppers, and card-parties, were the delight of the principal families in the town.” and it was through these 18th century avenues of carelessness that young William left the narrow way and went among the many who follow the broad way to destruction. This behavior would characterize him for the next fifteen years, until a train of circumstances would spark the tiny flame of faith once again.

Source: The Life of William Wilberforce by Samuel and Robert Wilberforce, 1838