Should You Homeschool Your Pediatric Stroke Survivor? 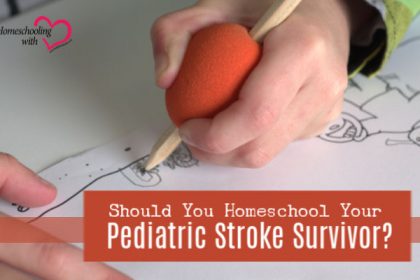 The day that my second son was born, homeschooling was an option that was on my radar as I had many friends and family members who had homeschooled their children.  When my newborn baby began having a seizure in my arms, it set us on a course that would eventually cement this decision.

When he was less than a day old, an MRI revealed that he had suffered an ischemic stroke.  Perinatal stroke occurs in 1 out of every 2,800 live births.  Around his first birthday, he was diagnosed with cerebral palsy, which is muscle weakness caused by damage to the brain, and he began physical therapy.  While he was 3 to 4 years old, we utilized our town’s early intervention preschool program because he received free physical and occupational therapies through them.  We went as far as having a pre-kindergarten PPT meeting with our local elementary school before finally making the decision to homeschool him instead.

According to the Children’s Hemiplegia and Stroke Association, some children who have had a perinatal stroke or a stroke during childhood may develop:

There were a variety of reasons that we made the decision to homeschool, and the challenges that a pediatric stroke survivor may face can vary greatly from child to child.  We knew his physical limitations, and since our local school was an older building with a lot of stairs, we had concerns about his ability to get around, especially in the case of an emergency.  Also, with his history of seizures, we felt safer being able to monitor him closely.

Some children qualify to receive therapies through their school system, but it was questionable what he would qualify for and it would have required him to be pulled out of class to receive these.  Over the years, we have utilized private PT, OT, and speech/language therapies obtained through our health insurance.  I spend the time while my son is in a therapy session working on schoolwork with my daughter and count it as a Physical Education class for him.

Some children who have suffered a stroke, especially if the event occurred on the left side of their brain, may have language learning issues.  Luckily, my son’s speech was not affected, but his ability to learn to read was.  We worked at his level, used the Guided Repeated Reading method for a while, then sought some intensive reading therapy at age eight (when it became clear that he needed it), and upon our speech language pathologist’s recommendation, switched to an Orton Gillingham-based, multi-sensory curriculum.

Making it a priority to read aloud well-written books (with rich vocabulary) to your child daily can help offset some language problems.  Despite my son having a reading disability, it was discovered upon evaluation by his speech language pathologist that his grammar and vocabulary skills were well above grade level which she said would help him in decoding words in the long run.  I attribute that to his exposure to words through hearing them read to him from books.

Many stroke survivors have challenges with the use of one or both of their hands.  My son is one of the rare cases that has full use of both of his hands, but he does have a diagnosis of dysgraphia which results in messy handwriting.  Homeschooling allows you to be flexible in how you approach these issues and make accommodations.  For instance, some children find it easier to write in cursive than to use ball-and-stick printing because it uses continuous strokes rather than repeatedly having to pick your pencil up and move it to a different position.  Having the option to begin with cursive or introduce it whenever you like to see if your child prefers it is an advantage.  My son had an aversion to writing for a long time because of the pressure that had been put on him to write in preschool so I have taken a gentle approach to handwriting instruction.  I also had him orally narrate back to me what he had learned, rather than filling out worksheets, until he became more confident.  If you take that route, though, make sure that your child is doing some of their own writing, if they are physically able to, and gradually increase the amount so it doesn’t come as a shock when you turn the responsibility over to them one day.  Another tool we have used is keyboarding.  If my son has to compose something using his own words, he often finds typing in a word processing program easier because he can think more freely when he doesn’t have to focus as much on the physical production of the letters.

One thing I love about homeschooling is that we have the flexibility to let him explore subjects that he has interest in and that can help build his confidence rather than feeling “less than” his peers because some of the more traditional learning has been challenging for him at times.  We can make time to fit these things in as much as we like.

If you are raising a pediatric stroke survivor and are considering homeschooling, please know that it can be done and there are advantages.  I’ve heard many parents complain that their child’s special needs are not being adequately met in a traditional school environment.  The International Dyslexia Association says that educators in public schools are not identifying children with dysgraphia and providing appropriate instruction, and that many schools do not have systematic instructional programs in handwriting and spelling which is especially important for children with disabilities in reading or writing.  Some children are pushed up a grade when they haven’t mastered important skills that they will need to build upon in later learning.  As a homeschooling parent, you can familiarize yourself with any possible learning challenges that your individual child may face and address them as needed while allowing them the time needed to master necessary skills.

Heather Eberlin is a married mother of four children, ranging in age from eight to twenty-seven. She is currently homeschooling her two youngest children and has felt called to share her journey in order to encourage others. She is an amateur gardener who is amazed at the things that God’s creation reveals when you take the time to pay attention to it. You can follow her at Musings from My Garden or download her free Homeschool Organizational Forms here. 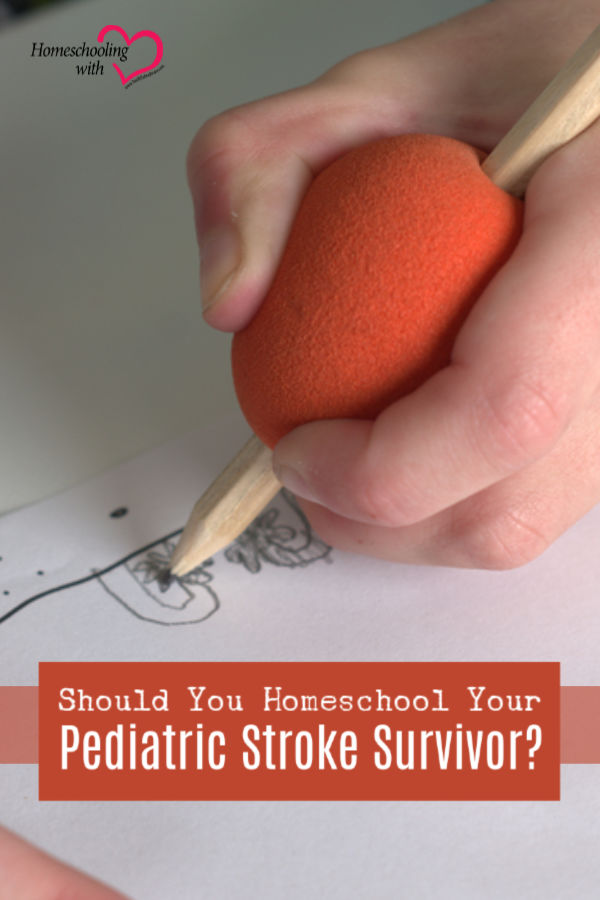 Share on FacebookShare on PinterestShare on LinkedInShare on TwitterShare on PocketShare on Email
Tagged under: heather eberlin, homeschool, homeschooling, should you homeschool your pediatric stroke survivor