A Review of “The Glass Universe” 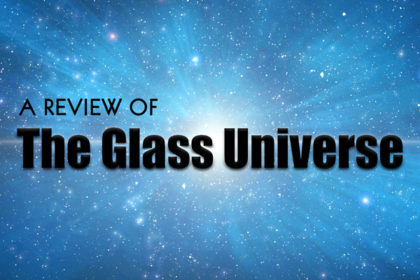 While doing inventory at work recently, I found the book The Glass Universe by Dava Sobel. Although I am not a science person, I decided to read the blurb. Fascinated by the historical aspects, I knew I had to review it. I will be examining it based on worldview, family friendliness, educational merit, and enjoyment quality.

Beginning in the 1880s, the Harvard Observatory began hiring graduates of the newly-formed women’s colleges as “human computers.” Their job was to apply mathematics to images male astronomers captured onto glass plates with telescopes. For the next forty years, these women would devote their lives to their work. The Glass Universe is their story.

The Glass Universe is written from a secular viewpoint. While the author mentions that several of the women were daughters of ministers and went to church on Sundays, no mention is made of their individual belief systems. Later in the book, there are references to “the evolution of the universe.” The usage of the term is not made clear but possibly points to Darwinian influences.

The book is definitely for high school students and adults with a firm grasp of scientific terminology. Younger students would do well to look for other biographies of the individual characters.

A science lover would get the most out of the book. Those who are reading it for the historical angle would do best to skim the highly technical passages.

Why should your students read The Glass Universe? After all, most of us reading this blog are probably not feminists in the modern sense of the word. I found three takeaways that would be useful to anyone reading the book:

• Do your work well even if you are not rewarded for it. The original group of “computers” were not allowed to look through telescopes and were told they would never advance to the highest levels at the observatory. Yet they continued to excel at their work.

• Remember how you were raised. When doors were closed to them, they did not throw tantrums, sue, or protest. They were raised to be ladylike, and they remained such at all times.

• We may not always see or benefit from the fruits of our labors. Although the original group of “computers” did not see the fruit of their labors in their lifetime, their labors were not in vain. They paved the way for those who came after them. As a mother who is homeschooling my children, I sometimes wonder if my labors are in vain. I may not see the fruits of my labor until my children are grown, but I will see them.

The women of The Glass Universe were in many ways examples for all of us. Most of all, they were patient, hardworking, and diligent. Let us learn from their example.

Karen Robuck is a homeschooling mother of two, an eighth grader and a fifth grader. She holds degrees from Blue Mountain College, a Christian liberal arts college in northeast Mississippi, and from the University of Southern Mississippi. She considers her homeschooling style to be literature-based eclectic with a dash of Charlotte Mason. Formerly a teacher and librarian, she is currently working in media support for a local community college. She lives in Pontotoc, MS with her husband, two children, and a fourteen-year-old cat named Ivan.