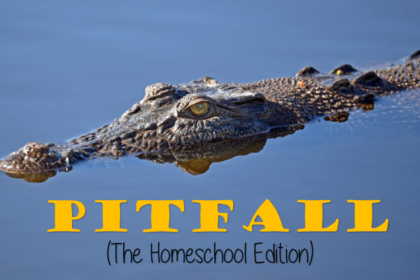 It’s about that time of year again.

Homeschooling mamas everywhere are about to get panicky.

Some of us can see the finish line to the end of the homeschool year, and it’s not looking too promising.

Johnny’s still two grades behind in reading and at this rate, we are NEVER getting through that science book.

In fact, we might have to repeat a whole year of American History because at least half of the household was sick during the American Revolution.

And don’t even think about that nature study notebook we were so excited about at the beginning of the year. As it is, we have a not-so-promising sketch of a pinecone and a dried leaf glued to a page.

One of my favorite video games as a young thing was the old Atari game Pitfall (circa 1982). The story had an Indiana Jones-type character running through the jungle looking for treasure and the like. Along the way, he would encounter a variety of “pitfalls.” There were crocodiles, rattlesnakes, and quicksand.

I became fairly adept at navigating those traps.

My Pitfall game was on!

If only I could master my homeschooling game the same way.

No matter how hard I try. No matter how much I plan and prepare . . . there is always going to be some sort of quicksand in my path: illness, a learning block, a family emergency . . . a less than inspiring curriculum.

One of the biggest pitfalls I’ve encountered in my homeschooling journey has been my son’s learning challenges. We discovered when he was around 8 or 9 that he was dyslexic. I tried everything: popular curriculums, learning methods, fish oil, midline therapy . . . anything but basically standing on my head (and believe me, if standing on my head would have made a difference I would have tried it).

One day, many years ago, I was pouring out my frustrations to my baby sister. She herself is a homeschool mama. Her kiddos don’t have any learning challenges, and she is undoubtedly more “put together” than I could ever aspire to be. But the question she put to me on that particular day made me think about my mindset in general.

“But isn’t he making progress?”

I had to think about it for a minute.

He couldn’t read much more than “hat,” “cat,” and “mat,” but together we read about glass elevators, giant peaches, and Hobbits. We studied the solar system and made up silly songs about planets. We spent afternoons in the park watching lines of busy ants and lines of busy people. We listened to Jazz, opera, and swing music.

We experimented with pancake recipes and made paper models of Jamestown. We created our own movies and board games.

Instead of worrying about what he wasn’t learning, I had to focus on all that he was learning! I needed to take the victories in our homeschool and build on those.

The idea to rejoice in those accomplishments made the world of difference to me.

My son WAS learning. And isn’t that the point?

Most of our homeschool students won’t be Olympic athletes or NFL quarterbacks. I decided a long time ago that my desire was to grow a compassionate human being who loved God and wanted to serve.

My son eventually began to read with confidence. He still struggles with large passages of material, but it is not impossible. He simply knows to take a bit of a break and start again.

Those years of creating paper models, listening to great audio books, and playing WAR every Tuesday afternoon while drinking hot chocolate and eating no-bake cookies have paid off.

Other homeschooling pitfalls have been of my own making. I’ve overscheduled. I’ve worn myself to a frazzle, and I’ve let myself become overwhelmed by the non-essentials.

So my advice is to start where you are. Start making lists of what you are doing and have done, rather than what you want to do. Take victory in the progress you are making. Some days that might be finishing another chapter in your current read aloud, playing WAR around the kitchen table, and dancing around the living room to Chubby Checker.

There will be time enough for rattlesnakes, quicksand, and yet another crocodile.

Rebekah Teague is the homeschooling mama to one busy and beautiful boy. She is married to The Muffin who is a pastor and a really great guy. In her spare time she can be found with a book and a cup of tea. She blogs at There Will Be A $5 Charge For Whining

Share on FacebookShare on PinterestShare on LinkedInShare on TwitterShare on PocketShare on Email
Tagged under: homeschool, homeschooling, pitfall, rebekah teague