How to Be a Donkey 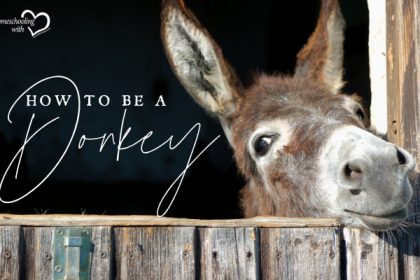 Palm Sunday. It’s a joyous day. We go to Sunday school and church, listen to a cantata of hosannas, and often leave with sprigs of palm leaves. Sometimes our children come into the “big” church waving paper palm branches.

Christians around the world commemorate Jesus’ triumphal entry into Jerusalem. And without a doubt, it’s important to teach our children to worship and praise the King. After all, the King is entering his earthly kingdom. Oh, the reception he received. The people were ready to be freed from the tyranny of the Roman oppressors. Many were expecting him to arrive on a horse as the military ruler to overthrow Caesar’s army. Instead, they saw a man coming on a donkey … the lowly donkey.

It’s also important to teach our children more of this triumphant story.

Eric Davis, a veterinarian from the University of California, expressed what many of us think, “Donkeys are the least of the least.” Thought of as stupid, stubborn beasts of burden, these animals don’t seem worthy of the task of carrying a king, much less the king of the universe. Certainly not what the Israelites in Jerusalem expected.

Let’s look a little deeper at this small, young beast and how we may need to imitate the donkey rather than the fickle crowd.

Three of the Gospels tell us Jesus sent his disciples into the village of Bethpage to find the animal he was to ride. He knew where this donkey and her colt would be tied up. Jesus was even prepared for the owner to question the disciples about taking them.

When they started to untie the animals, the disciples were questioned. Jesus prepared his friends, “If anyone says to you, ‘Why are you doing this?’ say, ‘The Lord has need of it and will send it back here immediately’” (Mark 11:3). They followed Jesus’ instructions, and the owner let them go (Mark 11:6).

Like me, you may not be surprised the animals were tied up. Here they were waiting for Jesus. After all, although described as the least of the least, the small equines were valuable for work. Their owners didn’t want them to wander off, especially a mother and her colt.

The restraint shows ownership. They needed to be untied to serve him. As instructed, the disciples untied them to take the animals to Jesus.

The poor donkey has a reputation of being stubborn. Often, they will not go where people think they need to go. This is not stubbornness; this is caution. A donkey may refuse to even cross a shadow if it is unfamiliar with the path and thinks there may be danger.

There is no indication this pair resisted. They willingly went. After being untied, they followed the men back to Jesus. Mother donkey didn’t have a sense of danger.

Like most animals in the equine family, donkeys need to be trained for the service they render. Mark indicates Jesus rode the colt. Likely untrained, it didn’t balk at the task it was to perform.

Donkeys can also be loving and trusting of humans they encounter. This colt trusted Jesus and allowed the man on his back.

As Jesus rode into Jerusalem on the donkey, he related to the common people. He didn’t set himself above them with a grand entrance. He rode not just a donkey, but a small young donkey. The king was on a humble creature.

What can we and our children learn from this little told aspect of the triumphant entry?

Each of us desires to serve God. We want our children to desire to serve him. Far too often, we are tied to schoolwork, field trips, park days, and so much more the world tells us is important. We also may need to be untied from burdens, guilt, cares, even devices. When we allow the Holy Spirit to untie us, we are free to serve.

Do your children argue with you? Silly question, right? Have you ever argued with God? I have. Surely, Lord, you don’t understand. Just as we expect our children to listen when we speak, we need to show them how to listen when God speaks. Then follow peacefully without question.

Just as our young children do, the colt naturally follows the mom donkey. But mom would have been more cautious, even defensive for her child. Aren’t we? She followed. She trusted. She didn’t show any signs of stubbornness. The colt trusted Jesus. This colt had no training, had never been ridden before. That didn’t keep it from doing the assigned task. As we trust, our children learn to trust. Trusting allows us to easily serve Jesus.

Jesus rode humbly on the donkey. The donkey, the least of the least, was not showy, didn’t stand out from the crowd. This little guy just went about the assigned task. Ouch. I think every family has that one. That one person who draws attention. Often, even though we don’t mean to, we unconsciously seek attention or accolades. But, let’s be honest, we do like it when we are noticed serving. This is a good time to teach secret service.

When we rejoice the coming of our king, let’s pray with our family to become servants, humble as a donkey.

In what way do we and our children need to be the donkey?

Go into the village in front of you, and immediately as you enter it you will find a colt tied, on which no one has ever sat. Untie it and bring it. 3 If anyone says to you, ‘Why are you doing this?’ say, ‘The Lord has need of it.

Adapted from an article originally appearing on UPGRADE with Dawn: Timeless Wisdom for Today’s Woman (http://upgradewithdawn.com/). April 11, 2019. Used with permission.

Susan K. Stewart, Nonfiction Managing Editor with Elk Lake Publishing, teaches, writes, and edits non-fiction. Susan’s passion is to inspire readers with practical, real-world solutions. Her books include Science in the Kitchen, Preschool: At What Cost?, Harried Homeschoolers Handbook, and the award-winning Formatting e-Books for Writers. Her latest book, Donkey Devos: Listening to you donkey when God speaks, is scheduled to be released spring 2021. You can learn more at her website www.practicalinspirations.com. 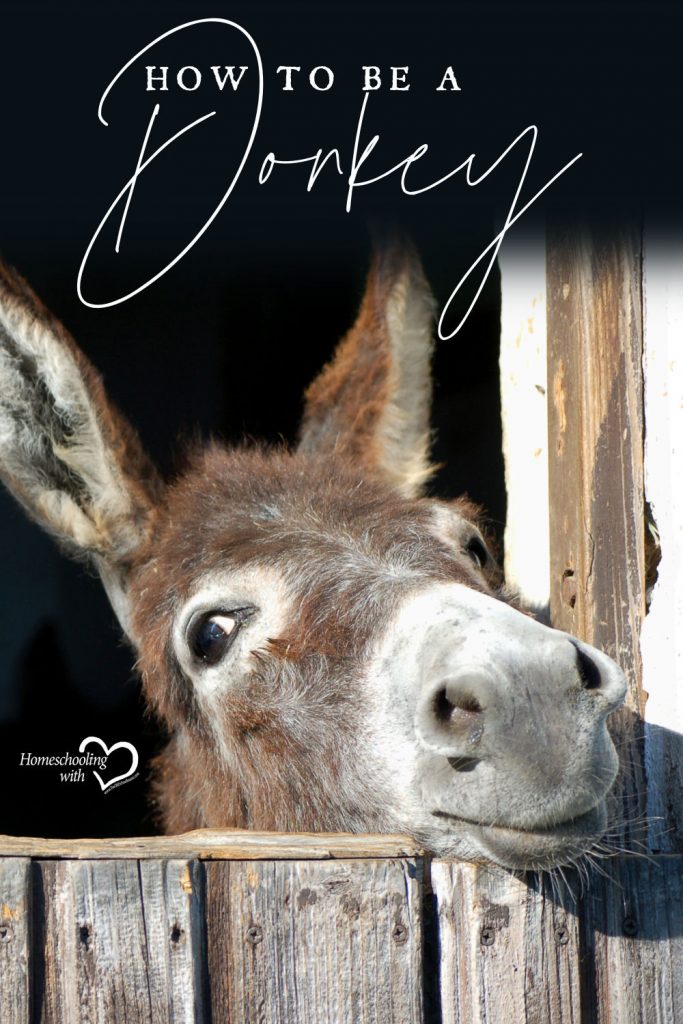