Homeschooling: The Myth of ‘Poor Socialization’ 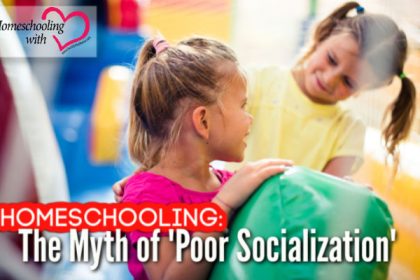 From the TeachingtheWord Bible Knowledgebase

Are Christian homeschooling parents in danger of raising children who are “socially stunted” or “hothouse Christians” who cannot function in the “real world”? What does Scripture say?

Christian parents often express the fear that their children will be “stunted socially” if they homeschool them. Some parents scorn the Biblical separation that must be the imperative behind homeschooling because they say they do not want to raise “hothouse Christians” but children who “can function in the real world.” These are among the greatest myths used against taking responsible, Biblical action to protect your children from the public school system and from fellowship with darkness generally.

Blessed Are the “Socially Stunted”

Blessed are your children, if they are thus “socially stunted”! If you do not train up your children in the way they should go, the unbelieving world will gladly train them for you. It will not be in “the nurture and admonition of the Lord” (Ephesians 6:4) but in “following a crowd to do evil” (Exodus 23:2).

Self-Esteem, Or Esteem for Christ?

Often parents will express the fear that if their children are homeschooled they will have “low self-esteem.” The vast majority of self-described evangelical churches enable and support this false notion by constantly putting the Christian life in false psychological terms – “avoiding low self-esteem” – “having a positive self-image” – “having a high view of your self-worth” – “loving yourself.”

But of what does Scripture speak? It speaks of humility, of esteeming others (especially within the family and in the body of Christ) better than ourselves – and gives Christ as our perfect example:

Let nothing be done through selfish ambition or conceit, but in lowliness of mind let each esteem others better than himself. Let each of you look out not only for his own interests, but also for the interests of others. Let this mind be in you which was also in Christ Jesus, who, being in the form of God, did not consider it robbery [a thing to be grasped at] to be equal with God, but made Himself of no reputation, taking the form of a bondservant, and coming in the likeness of men. And being found in appearance as a man, He humbled Himself and became obedient to the point of death, even the death of the cross. Therefore God also has highly exalted Him and given Him the name which is above every name, that at the name of Jesus every knee should bow, of those in Heaven, and of those on Earth, and of those under the Earth, and that every tongue should confess that Jesus Christ is Lord, to the glory of God the Father….

Do all things without complaining and disputing, that you may become blameless and harmless, children of God without fault in the midst of a crooked and perverse generation, among whom you shine as lights in the world, holding fast the Word of life… (Philippians 2:5-11, 14-16)

We also find this in the Old Testament:

Do not envy the oppressor, and choose none of his ways; for the perverse person is an abomination to the Lord, but His secret counsel is with the upright. The curse of the Lord is on the house of the wicked, but He blesses the home of the just. Surely He scorns the scornful, but gives grace to the humble. The wise shall inherit glory, but shame shall be the legacy of fools. (Proverbs 3:31-36)

For thus says the High and Lofty One who inhabits eternity, whose name is Holy: “I dwell in the high and holy place, with him who has a contrite and humble spirit, to revive the spirit of the humble, and to revive the heart of the contrite ones.” (Isaiah 57:15)

Both James and Peter cite these passages in their epistles:

“God resists the proud, but gives grace to the humble.” Therefore submit to God. Resist the Devil and he will flee from you. (James 4:6-7)

Likewise you younger people, submit yourselves to your elders. Yes, all of you be submissive to one another, and be clothed with humility, for “God resists the proud, but gives grace to the humble.” Therefore humble yourselves under the mighty hand of God, that He may exalt you in due time, casting all your care upon Him, for He cares for you. Be sober [self-controlled], be vigilant [always watchful]; because your adversary the Devil walks about like a roaring lion, seeking whom he may devour. Resist him, steadfast in the faith, knowing that the same sufferings are experienced by your brotherhood in the world. But may the God of all grace, who called us to His eternal glory by Christ Jesus, after you have suffered a while, perfect, establish, strengthen, and settle you. To Him be the glory and the dominion forever and ever. Amen. (1 Peter 5:5-11)

It Is Actually Public School Students Who Are “Stunted”

Who are the ones who actually lack “socialization”? I would submit that it is the young people who are in bondage to the public school system. A spokesman for the Home School Legal Defense Association has written on this phenomenon:

Academically homeschoolers have generally excelled, but some critics have continued to challenge them on an apparent “lack of socialization” or “isolation from the world.” Often there is a charge that homeschoolers are not learning how to live in the “real world.” However, a closer look at public school training shows that it is actually public school children who are not living in the real world.

For instance, public school children are confined to a classroom for at least 180 days each year with little opportunity to be exposed to the workplace or to go on field trips. The children are trapped with a group of children their own age with little chance to relate to children of other ages or adults. They learn in a vacuum where there are no absolute standards. They are given little to no responsibility, and everything is provided for them. The opportunity to pursue their interests and to apply their unique talents is stifled. Actions by public students rarely have consequences, as discipline is lax and passing from grade to grade is automatic. The students are not really prepared to operate in the home (family) or the workplace, which comprise a major part of the “real world” after graduation.

Homeschoolers, on the other hand, do not have the above problems. They are completely prepared for the “real world” of the workplace and the home. They relate regularly with adults and follow their examples rather than the examples of foolish peers. They learn based on “hands on” experiences and early apprenticeship training. In fact, the only “socialization” or aspect of the “real world” which they miss out on by not attending the public school is unhealthy peer pressure, crime, and immorality. Of course, the average homeschooler wisely learns about these things from afar [and, we would add, through a Biblical lens] instead of being personally involved in crime or immorality or perhaps from being a victim.[1]

Dear Christian parent, the next time you have doubts about the “socialization” of your homeschooling children, or think you are in danger of raising “hothouse Christians” who won’t be able to function in the “real world” – consider these things!

Dr. Paul M. Elliott is a founder and president of TeachingTheWord Ministries, and the regular speaker on The Scripture-Driven Church broadcast.

Raised in a Christian home, Dr. Elliott came to personal saving faith in Christ at an early age in the 1960s. He was a manager and consultant in the business world before God called him to the ministry. A frequent conference, seminar, and pulpit speaker, he holds a doctorate in Biblical interpretation, and has written six full-length books and hundreds of articles and booklets.

Founded in 1998, TeachingTheWord is committed to the task of evangelizing the world and edifying the saints, which is Christ’s Great Commission. TTW seeks to support individual believers and the local church by carefully communicating Biblical truth, and addressing critical issues confronting individual Christians, families, and churches.

TTW’s ministry is based on the proposition that Christ’s church must be the Scripture-driven church; God’s inspired, inerrant Word must be our sole authority, and our infallible critic, in every area of life and ministry.