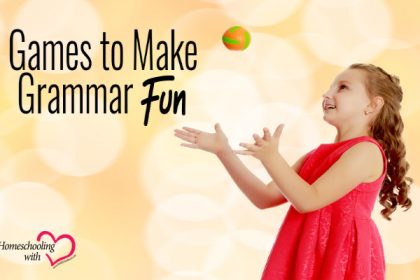 In 2013, I wrote this article for The Old Schoolhouse®. Six years later, it may be time to add to that bag of games, this time with some games that can be played inside as well as outside.

Categories/Bean Bag or Ball Toss: Either of these games could be used to reinforce parts of speech, or synonyms and antonyms. To play Categories, sit in a circle. (If only two people are playing, sit across from each other). Name a part of speech. Each person after that must give an example or say a word. Each person must respond with a synonym or antonym. Continue for three rounds or until someone misses, then change the category. For an added challenge, get more specific. For example, instead of, “nouns,” make the category, “proper nouns,” or “idea nouns.”

The only changes necessary for Bean Bag/Ball Toss are to stand instead of sit, and passing the object back and forth to change turns.

Parts of Speech Bowling: Collect eight to ten plastic bottles, then fill them with anything that adds a little weight. Write a word or a part of speech on each one. Set them up in a bowling pattern. Use a tennis ball to knock over the pins. As the student knocks them down, he or she must give an example of the part of speech or name a synonym or antonym.

Twenty Questions: Choose one person to be “It.” He or she will think of a word. Your other children must guess the word, using no more than twenty, “yes,” and “no,” questions. Simon Says: Simon Says is the perfect game for reviewing verbs—but how about changing it up a bit? Your children must still obey only when they hear, “Simon says.” But instead of the standard action command, try something like: Simon says, “Give me a place noun,” or, Simon says, “Name three synonyms for hot.”

Hot Potato: Your children or other students stand in a line with a bean bag or tennis ball. Give them a part of speech or a word. As the “hot potato” is being passed, each player must give an example of a part of speech, name the part of speech of the given word, or give both a synonym and an antonym. Whoever misses has “dropped the hot potato,” and is out. Or he could go to the end of the line, and the game would begin again.

Grandmother’s Trunk: This one could get interesting! Your children must name examples of a given part of speech for each letter of the alphabet. Or, use it to review nouns. That’s what you pull out of grandmother’s trunk, after all!

Your children may never love grammar, but these ideas are certain to provide a needed change from the workbook/worksheet approach that is all too common. Give them a try!

Karen Robuck is a homeschooling mother of two. She holds degrees from Blue Mountain College, a Christian liberal arts college in northeast Mississippi, and from the University of Southern Mississippi. She considers her homeschooling style to be literature-based eclectic. Formerly a teacher and librarian, she is currently working in media support for a local community college. She lives in Pontotoc, MS with her husband and two children.