Creative Ways to Get Chores Done 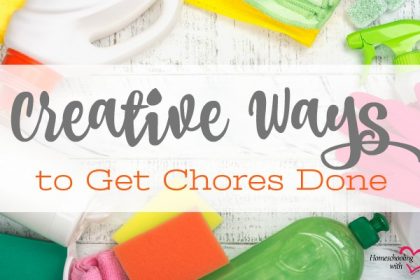 At this time of year, we often find ourselves frantically cleaning in order to get the house ready for visiting relatives. With small children, it feels like the filth multiplies and we can’t keep up. It certainly challenged me. I often felt like a maid on steroids. You can read more about that HERE. Keeping the house clean with four children under age 10 exhausted me. When my kids were small, I loved to go on field trips just so I wouldn’t have to clean up after them.

I struggled with comparing my home to the pristine clean of some of my acquaintances. Never mind that their children were gone all day at school, unable to undo their cleaning efforts. I marveled at the order in the boys’ bedrooms and the antiques in their living rooms. But then, I realized that there were hardly any books to be seen. No baskets of blocks, no containers of art supplies. Either they were hidden away or non-existent. I stopped comparing and instead, developed systems.

The first thing I did was make a list of all the chores in the house from bathrooms to bedrooms, floors to cabinets. The second thing I did was determine the appropriate age for each type of chore.

When I started the whole chore chart thing, I think my youngest was 3 years old. I assigned her chores and the other two had a magnetic chore chart. I think Melissa & Doug made it. There were pre-printed chores and little boxes. I could give them each a star when they completed their chores. The problem with this system, though, was that the magnets could get lost. And, even though they included some blank magnets, there never seemed to be quite enough of them. I soon moved to another system.

Another system I came up with allowed a random assignment of chores. I wrote individual chores on slips of paper (which later became popsicle sticks) and allowed each kid to choose two or three chores from the jar. If the child got a chore that was too difficult for her to do, she put it back and drew a new chore.

Forget it, I’m Just Assigning Them

For a little while, I just assigned chores. I rotated them among the four children, again allowing for the differences in ability. However, I added a twist. Instead of me evaluating their work, they had the opportunity to evaluate each other’s work. They could offer tips for improvement and further instruction if needed. You might think that this would invite them to be overly critical. Not so. Because all of them received feedback, they were careful about what they said. They knew that if they were too harsh, another sibling might be harsh with them. It did encourage them to teach each other and to be fair.

A Box of Pictures

The last system I tried involved taking pictures of cleaned areas of the house. After each room or area had been cleaned, I took a photograph. Then, I wrote captions for all of them, printed them, and laminated them. I put them all in a card file and everyday, the kids would take turns choosing from the card file. I rotated the order of choosing so that everyone would get a chance to choose first at some point. The card made it very clear what I wanted the area to look like when they were done cleaning it. I had grown tired of showing people how to clean by this point and they were all old enough to do just about every chore. I still have that box of photos and the only reason I don’t use it now is because two of my children are grown and no longer do “chores.” I don’t feel it’s fair to lay it all on the younger two.

I have heard of other systems, such as a Wheel of Fortune style chore wheel whereby children spin for their chore. I have heard of people organizing one list for each child and the one who wakes up first gets first pick. We have also used a toy rotation system to keep old toys interesting and reduce the amount of clean up.

I hope that some of these ideas help you rally the troops to get your house ready for the relatives this Christmas season and all year long. Happy cleaning!

Julie Polanco is a veteran homeschooling mom of 16+ years and the author of God Schooling: How God Intended Children to Learn and 100 Ways to Motivate Kids. You can receive a FREE chapter of her book by going to http://www.godschoolingbook.com.