Confessions of a Reluctant Home Educator 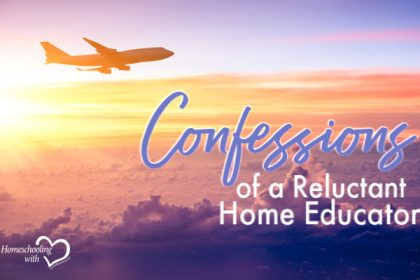 We were thrilled with our firstborn, but whenever people congratulated us, they usually added, “Enjoy your time with her. Soon she’ll be in school, and you’ll be writing again.”

Sure, I’d silently retort, in about eighteen years.

God had clearly blessed us with our daughter. He’d also made it clear we were to homeschool her. I was young, at the peak of my career even while pregnant and writing on bed rest. Unheard of for a starting freelancer, I’d signed a three-manuscript contract. My first novel, with an afterword mentioning the anguish of our first miscarriage, was an Evangelical Christian Publishers Association bestseller. It even got a nod in a top secular magazine.

And I was supposed to give all that up?

Looking back, I think I could’ve had it all, but that seemed impossible to me then. In the twenty years since, I’ve learned to believe in miracles and experienced how our gracious Father blesses even faulty obedience.

We began homeschooling in a no-man’s land: between the local public school community, with whom we had significant ties, and the local homeschool community, who were suspicious because of the former. I was told that I was too needy, and my professional teaching experience handicapped my homeschooling. My husband offered little academic help until recently, but I never would’ve made it without his and the Lord’s unflagging support. If my motivation had been anything besides obedience to them, I might’ve resented it anyway.

God alone has supplied all we’ve needed. He’s carried us through the impossible again and again. Our children have been homeschooled through high school, despite my repeated, sincere threats to send them to public school. I’m so glad I didn’t. So are they. Our two graduates wish they were still homeschooled, and advise their younger sibling to savor it. Though I seldom subscribe to adages and haven’t forgotten how long some days and nights were, the entire time truly seems short now. My Psalm 126:5-6 motto has become reality: “Those who sow in tears shall reap with joyful shouting. He who goes to and fro weeping, carrying his bag of seed, shall indeed come again with a shout of joy, bringing his sheaves with him.” One Sunday this spring break, my husband was trying to get our adult daughters to the airport, hours away. We’d had a blizzard the day before and through the night. The airline announced that flights might be delayed for days. Our daughters’ tickets were non-refundable, and our middle daughter’s pass card to board expired Tuesday, with no possibility of replacement for weeks.

Before our youngest daughter and I tried going to church, we sent the rest of our family off with hugs, prayers, food, warm outerwear and blankets. They soon returned. The aging van was flashing warning lights. My husband investigated and decided snow from our unplowed road had probably just gotten under the hood, so they set off again—even though the freeway ahead was still closed.

Knowing some of this, our pastor asked me at church, “How are the girls going to make it back to college?”

I could only answer, “Faith.” Things looked impossible, but we all hoped God would make a way for us, once again. Recalling the Jordan River crossing in Joshua 3:13-16, I stuck out my foot. “Sometimes the waters don’t part until you get your feet wet, right?”

Just then, a new professional mother brought her baby into the church foyer. “Enjoy her,” I said, gazing at the bundle in the carrier. “Soon she’ll be on a plane.”

Constance Clay is a former journalist, Evangelical Christian Publishers Association best-selling novelist and adjunct professor of composition at a state university where she earned her MA in literature. Currently she’s a grateful child of God. He’s shaped her into a homesteading wife of thirty years and homeschooling mom of twenty years with one Christian university graduate, another undergraduate at the same school and the youngest a homeschooled fifth grader (approximately). Constance began a blog at isaiah64eight.org and she’d love to hear from you!

Share on FacebookShare on PinterestShare on LinkedInShare on TwitterShare on PocketShare on Email
Tagged under: confessions of a reluctant home educator, constance clay, homeschool, homeschooling